Just for Now by Abbi Glines 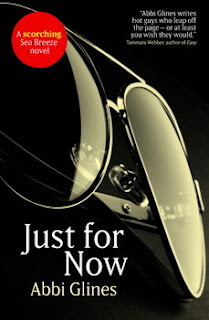 From Goodreads: The day Preston Drake figured out that wealthy women paid well for a set of tight abs and a pretty face his life turned around.

The run down rat-infested trailer he had shared with his alcoholic mother and three younger siblings was now only a place he visited to pay the bills and stock the pantry with food.

He no longer worried about his family starving or living without electricity. The money he made entertaining rich older women more than covered his family’s needs and his own. He had it all figured out. Except…

There was this girl.

She was as innocent as he was tainted.

Amanda Hardy wished her knees didn’t get weak when Preston walked into a room. She hated the fact her heart raced when he flashed his smile in her direction. He had a different girl in his bed every night. He was the kind of boy a smart girl ran from. So, why was she coming up with ways to get close to him? Even when it was obvious he wanted to keep her at a distance.

Maybe her heart knew something the world didn’t. Maybe Preston Drake was more than just a pretty face.

I have to admit that Preston wasn't really a character that stood out for me in the previous books - but I did really like Amanda so was keen to read her story. And I found myself really liking Preston.

This time the connection between the two characters felt less like insta-love - having been in the same circle of friends for a while and the fact she'd had a crush on him for ages - so that was nice. Also, I really enjoyed Preston's back story - his brothers and sister and how much he cares about them. Of course, his secret is not good but you are given a good explanation for why he chooses to do it.

Again we get both points of view (brilliant!) and all the previous characters make appearances (also brilliant!) - so all in all I have to say I am really enjoying this series.