While it Lasts by Abbi Glines 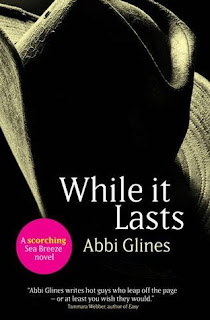 From Goodreads: Set in the steamy coastal Alabama town of Sea Breeze, an interconnected group of older teens hook up, break up ...and much, much more. Cage York has a free ride to college for baseball - or he did, until he got in trouble for drink-driving. Now he has to give in to his coach's demands and spend his summer baling hay. No hot babes in bikinis waiting to meet a Southern boy to make her vacation complete. Just him and the damned cows. Oh and an uptight, snarky brunette with the biggest blue eyes he's ever seen. Eva Brooks planned out her life step by step when she was eight years old. Not once over the years had she lost sight of her goals. Josh Beasley, her next door neighbour, had been the centre of those goals. He'd been her first boyfriend at seven, her first kiss at ten, her first date at fifteen and her first tragedy at eighteen. The moment she'd received the phone call from Josh's mother saying he'd been killed along with four other soldiers just north of Baghdad, Eva's carefully planned life imploded in the worst way possible. Now she has to deal with the arrogant Cage York and his irritating smile. But as the summer bailing hay rolls by, Cage and Eva learn that what they want (and need) may be something they never saw coming.

So I think it is an understatement to say I was looking forward to reading Cage's story! Having loved him so much in Because of Low (where he possibly stole every scene he was in) - I was really looking forward to a whole book filled with Cage-y-goodness! And yes, I loved it!

So Cage messes up and is sent to a farm to work, where he meets Eva, the farmer's daughter. Straight away there is an intense connection between the two (but I'm not sure if I'd say it is attraction or hatred lol) - but Eva is still coming to terms with the death of her fiancé - so is there room for Cage in her life? And does he want there to be?

I liked Eva. She was different then I thought she'd be - more uptight (but I actually found I liked this - it made her more relatable!) - and it goes without saying that I loved Cage. I was pleased to see Low pop up in this - I really do like the way the stories connect and continue - and there is an obvious set up for the next book in a scene with Preston and Amanda.

Again - this is fun to read, with lots of romance. Yes it is insta-love - but I also find that the characters do find a way to connect properly too (in this case Cage's reaction to hearing about the death of her fiancé and how he treats her after he finds out). I also loved how this one is resolved. And the setting!

So yes, sign me up for Just For Now!

Email ThisBlogThis!Share to TwitterShare to FacebookShare to Pinterest
Labels: 4 Stars, Abbi Glines, For Review, Reviews, While it Lasts

Abbi Glines outdid herself with WHILE IT LASTS. She created characters that stick with you for days after you’ve read their story and crazy twists and turns within the story that leave you breathless one minute and wanting to scream you head off the next! The story flowed perfectly and I was entranced from page one…I didn’t want to put this book down.