The Indigo Spell by Richelle Mead 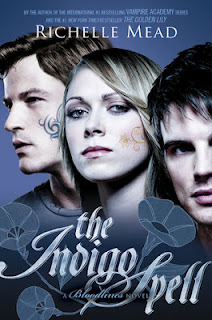 From Goodreads: In the aftermath of a forbidden moment that rocked Sydney to her core, she finds herself struggling to draw the line between her Alchemist teachings and what her heart is urging her to do. Then she meets alluring, rebellious Marcus Finch--a former Alchemist who escaped against all odds, and is now on the run. Marcus wants to teach Sydney the secrets he claims the Alchemists are hiding from her. But as he pushes her to rebel against the people who raised her, Sydney finds that breaking free is harder than she thought. There is an old and mysterious magic rooted deeply within her. And as she searches for an evil magic user targeting powerful young witches, she realizes that her only hope is to embrace her magical blood--or else she might be next.

Populated with new faces as well as familiar ones, the Bloodlines series explores all the friendship, romance, battles, and betrayals that made the #1 New York Times bestselling Vampire Academy series so addictive—this time in a part-vampire, part-human setting where the stakes are even higher and everyone’s out for blood.

I'm really enjoying the Bloodlines series! It is quite different from the Vampire Academy series - more slow paced I think - but I'm finding it equally compelling.

So, we get the aftermath to that 'forbidden moment'. I have to say I was annoyed at Sydney for her reaction - but certain events in this one explain why she might have acted the way she did - and they also have interesting implications for Sydney's behaviour in the future!

I'm also really enjoying the magic in this series! I like that Sydney has that ability - and I'm also very interested to learn more about the Alchemists. I still don't trust them at all. Talking of trust - Marcus is interesting! I'm hoping to see more of him.

There is also a story within the main story arc - girls are being targeted for their magic powers - which is interesting enough and gives Sydney the kick she needs to embrace her magic. Plus it's a good reason for Sydney and Adrian to spend time together!  I'm hoping that in the next book she does that even more.

And yes, I loved the ending...

Can't wait for The Fiery Heart!

I thought that Sydney's reactionwas really appropraite to the character and I loved the ending.

I apologise for my abysmal spelling in that comment...

I can't wait for the next book too! But I kind of don't mind Sydney's choices-- coming from her background, her resistance is realistic.