Because of Low by Abbi Glines 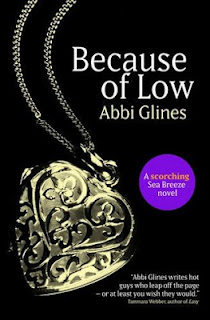 From Goodreads: Set in the steamy coastal Alabama town of Sea Breeze, an interconnected group of older teens hook up, break up ...and much, much more. Marcus Hardy had hoped to enjoy a year away at college while he put the summer he'd rather forget behind him. But instead, he's jerked right back his home town of Sea Breeze due to a family crisis. The only bright spot to returning is the hot redhead who sleeps over at his place several times a week. There's just one thing though - she's sleeping in bed with his new roommate, Cage York. Willow "Low" Foster needs a place to live. Running to her best friend Cage's apartment every time her sister kicks her out isn't exactly a long term solution. But Cage has a new roommate and suddenly sleeping over at his apartment isn't such a bad thing. Not when she gets to see those sexy green eyes of Marcus's twinkle when he smiles at her like he wants her there. There's one problem though, Cage is under the disillusion that when he's through sowing his wild oats, he's going to marry Low - an assumption Marcus intends to change. But when his carefully laid plans come crashing down with a revelation he never expected, Marcus will have to choose between Low or his family. Because once the truth comes out ...there's no other choice.

Having already read and loved The Vincent Boys I was very keen to get stuck into her Sea Breeze series - and I loved it! Really easy to read with loads of romance - just my kind of book.

I love the fact that these books are all set in the same place, with the same characters. As this is the second book in the series (after Breathe - which is publishing later in the year) I was concerned I might be starting off in the wrong place - but I shouldn't have worried. The books can easily be read as standalone stories (yes the characters continue but I don't think it ruins anything).

In this story Marcus meets Low - his roommate's friend - and they instantly have a connection. But with Cage thinking he's going to marry Low (eventually!) it causes a little bit of a problem... But that's not the only problem...

I really loved Cage. That was my first thought. Of course, I loved Marcus too - and think he was a better match for Low. I also like the way the story is told from both Marcus and Low's point of view. There is a good twist in the tale too - although I think readers will see it coming - but it's fun waiting for Marcus and Low to catch up.

Really great fun - I read the next two straight after this one I enjoyed it so much (and them too!) Yes, I think they are a bit predictable (but I mean this in a good way!) There is a certain formula that they follow - but I enjoyed that - knowing what I'm going to get going in. Don't change something that works is what I say!

Can't wait for Breathe (I really want to read Sadie and Jax's story!) - and I'm looking forward to reading more of Abbi Glines books in the future.

Email ThisBlogThis!Share to TwitterShare to FacebookShare to Pinterest
Labels: 4 Stars, Abbi Glines, Because of Low, For Review, Reviews