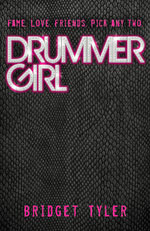 It was supposed to be the summer of her life. Instead, 17-year-old Lucy finds her best friend Harper shot dead in an LA swimming pool. How did it come to this? Lucy Gosling is the drummer in Crush, a rock band formed by five London schoolgirls that has just won the UK semi-final of an international talent contest. But when the band lands in Hollywood for the big final, things are not quite as they seem. The band's lead singer, Harper, has just one thing on her mind – using sex, drugs and rock and roll, not to mention Crush itself, to win back her bad-news exboyfriend.

Lucy must decide whether she's playing to Harper's tune, or setting the rhythm for the rest of the band…

As soon as I read the synopsis for this I knew I had to read it! 'Gossip Girl meets American Idol, meets Glee's evil twin' Hell yes! And I absolutely loved it! I love this kind of setting - the whole behind the scenes of fame - putting relatable characters into that setting and seeing how they cope!

I love how this starts too. It kind of reminded me of the beginning teaser of a TV show - giving you a taste of what is going to happen and then taking you back to watch it all unfold. Usually I prefer first person narrative but for some reason with this I loved getting the story from different points of view and I didn't really notice the third person narrative. I still felt as if I were in the head of the person telling the story at that time. And the jumping back and forth could have been confusing but it really wasn't - plus there was so much going on and many different story threads - all equally compelling. I really enjoyed it.

This story certainly shows the darker side of fame - how easy it is to be lead in a direction you wouldn't have thought you'd take. It makes for very interesting reading - and it gave the story much more depth than I was originally expecting.

I have to say I would love for this to be a series - or at least have a sequel. I really enjoyed the characters and would love to catch up with them again. Especially Lucy! And there is one storyline I would like to see tied up a little bit more...

Brilliant - I can't wait to read more by this author!

Glad you liked this - I have a copy on my TBR pile and I'm really looking forward to reading it :) I love the pink page edges!