This week I purchased:

Twenty Boy Summer by Sarah Ockler
From Amazon: For sixteen-year-olds Anna Reiley and Frankie Perino, their twenty day-long, minimally supervised California vacation will be the 'Absolute Best Summer Ever' and according to Frankie, if they meet one boy every day, there's a pretty good chance that Anna will get her first real boyfriend. Anna lightheartedly agrees to the game, but there's something she hasn't told Frankie - she's already had that kind of romance, and it was with Frankie's older brother, Matt, just before his tragic death one year ago. Written in lyrical, accessible prose, this is a debut novel that explores what it truly means to love someone and what it truly means to grieve, and perhaps most importantly, how to make the most of every single moment this world has to offer.

Everlost by Neal Shusterman
From Amazon: Nick and Allie don't survive the crash, and now they are in limbo, stuck halfway between life and death, in a netherworld known as Everlost. Everlost is home to those who didn't make it to their final destination: A magical yet dangerous place filled with shadows where lost souls run wild. Shocked and frightened, Nick and Allie aren't ready to rest in peace just yet. They want their lives back. Desperate for a way out, their search takes them deep into the uncharted regions of Everlost. But the longer they stay, the more they forget about their past lives. And with all memory of home fading fast and an unknown evil lurking in the shadows, Nick and Allie may never escape this strange, terrible world. In this imaginative, supernatural thriller, Neal Shusterman explores questions of life, death, and what just might lie in between.

The Eternal Kiss - edited by Trisha Telep
From Goodreads: There’s an allure to vampire tales that have seduced readers for generations. From Bram Stoker to Stephenie Meyer and beyond, vampire stories are here to stay. For those fresh-blooded fans of paranormal romance or for those whose hunt and hunger never dies, these stories have what readers want! This collection of original tales comes from some of the hottest, most popular, and best-selling YA writers. 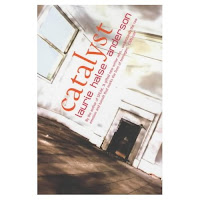 Catalyst by Laurie Halse Anderson (I found this in a charity shop for £1 - bargain!)
From Amazon: Kate's failure to get into college to study chemistry, the only subject she can cope with, sends her spinning out of control. She'd only applied to one college - now what? Then her rector father brings home a local family, made homeless in a fire. Teenager Teri is the class outcast, but slowly she and Kate become friends, while little Mikey melts Kate's heart, until a tragic accident sets in motion a chain of events which will change both Teri and Kate's lives for ever.

Beauty by Robin McKinley (Also found this a charity shop for the bargain price of 50p)
From Amazon: When the family business collapses, Beauty and her two sisters are forced to leave the city and begin a new life in the countryside. However, when their father accepts hospitality from the elusive and magical Beast, he is forced to make a terrible promise - to send one daughter to the Beast's castle, with no guarantee that she will be seen again. Beauty accepts the challenge, and there begins an extraordinary story of magic and love that overcomes all boundaries. This is another spellbinding and emotional tale embroidered around a fairytale from Robin McKinley, an award-winning American author.
What did you get?
Posted by I Want To Read That at 07:41

Now that is a good selection of books! I love that cover for Beauty, which I'm also hoping to read soon. The Eternal Kiss sounds great too.

I also have The Eternal Kiss but haven't been able to read it yet. Hope you enjoy your books!

Ahhh, Robin McKinley! I love her! Ahhh! I hope you enjoy Beauty, it's a decent book, not her best, but decent, and quite lovely :-D

I've had Everlost on my TBR for awhile--can't wait to see what you think of it!

You had some good books this week. EVERLOST sound so good and many have raved about it. I have to read it soon

Great books you got this week. They all look pretty good. Hope you enjoy reading all your books.