A Time for Dancing by Davida Wills Hurwin 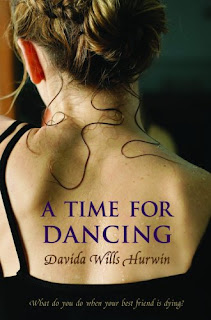 From Goodreads: Samantha and Juliana. Sam and Jules--they've been best friends forever. Now, in the summer before their senior year, they're ready for anything! College? Professional dance careers? They'll share the triumphs and face the fears together. But neither of them is prepared for what happens when Jules is diagnosed with an incurable cancer.

I brought this because I liked the film adaptation of it. The book is quite different from the film but this isn’t a bad thing. It was well written and I liked having the story from both points of view. I really enjoyed the friendship between Jules and Sam – it felt realistic. Davida Wills Hurwin did a great job in creating these characters and gave them unique voices – it was easy to tell who was speaking without having to check each chapter heading. The story has been done before but the characters and relationships makes this one stand out – Jules has a great relationship with her parents and I loved how Sam acted with her family too. The scenes towards the end of the book are very touching – between Jules and Sam and between Sam and Jule's parents. I would really like to read the sequel 'The Farther You Run.

I think this would appeal to people who have enjoyed 'Before I die' or books by Lurlene McDaniel. The beginning and ending were really good but I felt it lost momentum a bit in the middle – otherwise I would easily have given it 4 stars.

It's great to hear about this - I'd never heard of it before. Thanks!

Same here. Not heard of the book or the author. Thanks for the review.