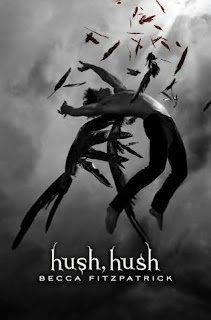 From Amazon: A sacred oath, a fallen angel, a forbidden love...This darkly romantic story features our heroine, Nora Grey, a seemingly normal teenage girl with her own shadowy connection to the Nephilim, and super-alluring bad boy, Patch, now her deskmate in biology class. Together they find themselves at the centre of a centuries-old feud between a fallen angel and a Nephilim...Forced to sit next to Patch in science class, Nora attempts to resist his flirting, though gradually falls for him against her better judgment. Meanwhile creepy things are going on with a mysterious stalker following her car, breaking into her house and attacking her best friend, Vi. Nora suspects Patch, but there are other suspects too - not least a new boy who has transferred from a different college after being wrongly accused of murdering his girlfriend. And he seems to have taken a shine to Nora...Love certainly is dangerous...and someone is going to have to make the ultimate sacrifice for it. 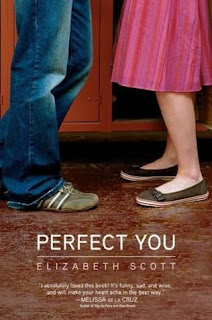 Perfect You by Elizabeth Scott

From Amazon: Kate Brown's life has gone downhill fast. Her father has quit his job to sell vitamins at the mall, and Kate is forced to work with him. Her best friend has become popular, and now she acts like Kate's invisible.
And then there's Will. Gorgeous, unattainable Will, whom Kate acts like she can't stand even though she can't stop thinking about him. When Will starts acting interested, Kate hates herself for wanting him when she's sure she's just his latest conquest.
Kate figures that the only way things will ever stop hurting so much is if she keeps to herself and stops caring about anyone or anything. What she doesn't realize is that while life may not always be perfect, good things can happen -- but only if she lets them....

You will LOVE Hush, Hush, and I haven't heard of Perfect You but it sounds good. I'll have to add it to my TBR pile.

I ordered Hush Hush from Amazon but it still hasn't arrived. It is so annoying. Still, I hope you enjoy it. Everything about it sounds amazing! I didn't get any books this week. :(

I wanna read Hush, Hush, but I don´t know what about is!
All English or U.S. blogs are always talking about it, and they say that is a very good book :)
Happy readings ^^
We read each other!

Great books this week. Hush, Hush is beyond amazing and I hope you enjoy it as much as I did. *sigh*

I am reading Hush, Hush now. It is really good! Enjoy!!!

Hush, Hush is brilliant and Perfect You is pretty good too. Hope you enjoy your books!

Great books. Have fun reading them. :)

Great purchases - can't wait to see what you think of both!

Great books you got this week. They all look really good. Hope you enjoy reading all your books.

I loved Perfect You! It's in my "to be reviewed" pile and I must get around to it! I hope you enjoy your books - happy reading!

Hush, Hush is everywhere, it seems, and it's on my TBR list too! I hope you enjoy it!

I loved Perfect You!!!