The Forest of Hands and Teeth by Carrie Ryan 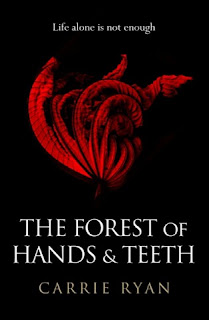 From Amazon: In Mary's world there are simple truths. The Sisterhood always knows best. The Guardians will protect and serve. The Unconsecrated will never relent. And you must always mind the fence that surrounds the village; the fence that protects the village from the Forest of Hands and Teeth. But, slowly, Mary's truths are failing her. She's learning things she never wanted to know about the Sisterhood and its secrets, and the Guardians and their power, and about the Unconsecrated and their relentlessness. When the fence is breached and her world is thrown into chaos, she must choose between her village and her future-between the one she loves and the one who loves her. And she must face the truth about the Forest of Hands and Teeth. Could there be life outside a world surrounded in so much death?

I bought this last year when it was first released but didn’t pick it up to read until now. If I had known how much I’d love it I would have read it much sooner. I just found myself gripped by this novel and Mary’s journey. Carrie Ryan has an amazing writing style that feels so simplistic yet manages to convey so much detail. I think Mary will be someone you either like or hate and since the book is a very internal narrative of her journey if you find yourself disliking her you may find it hard to enjoy this book. I adored her though. She had such strength and determination and I completely understood her need to find out if there was more than their village and life surrounded by the unconsecrated.

The mythology behind the Return (as it is called) and the unconsecrated is rather vague. I liked this as I felt it added a sense of realism – it makes sense to me that a small village managing to survive an apocalyptic event would lose knowledge of the past over time. In fact, I found the whole story felt realistic which I think is rather amazing considering it is essentially about a zombie apocalypse. There is something about the way Carrie Ryan writes that had me completely immersed and invested in all aspects of the story.

There are many twists and turns to the story. Many things happen that you just don’t see coming which I loved. I had no idea how this was going to end and although I loved how it ended I do wish there had been just a bit more of the ending. It just felt too abrupt, with too many things left unanswered. I know there is a sequel scheduled for release later this year but I believe that is set several years in the future so I am not convinced it will give me the closure to this story that I am looking for. Had it not been for this I would easily have given this book 5 stars.

If you are looking for a lighthearted read this isn’t going to be the book for you. It is very dark and suitably bleak considering the world the characters live in, but I found it so compelling I couldn’t stop myself thinking about it until I could carry on reading it. I can’t wait for the next instalment.

Email ThisBlogThis!Share to TwitterShare to FacebookShare to Pinterest
Labels: 4.5 Stars, Carrie Ryan, Reviews, The Forest of Hands and Teeth

I got this for christmas and I really want to read it! Great review.

I bought this one a while back, still not got round to reading it yet, may have to bump it up a bit, thanks for the review

Thanks for the wonderful review - you have absolutely reminded me how much I loved this book and how much I want to read the sequel. It really is engrossing, isn't it? I do agree that the ending felt abrupt but I'm still intrigued to find out what happened to Mary. I hope we do find out.

When I first read its synopsis I didn't get excited. Maybe I should it though :)

Bloody hell, if I don't read this soon, I'm going to be very cranky! :)

Awesome review- I loved this book too. It was so real in such an unbelievable way just like you said. I can't wait for the next book.

LOL Melissia's comment made me giggle. What a FABULOUS review! Considering the subject matter, I would actually consider reading the book now which I so would not have before. Zombies just have zero appeal but now I get that it is more about survival. Goodness knows why I thought it would be a zombie-human love story.

This sounds so good! I want to read it now, but i have to say that the cover is not that great. :)

Great review, Sammee! I didn't like this as much as I wanted to so I'm glad that you loved it for me! :)