I love both of these! I really like the design in the background on the US but also love the way Nick is in the shadows in the UK one. Both this week I think! REALLY can't wait to read this one - it sounds fab:) 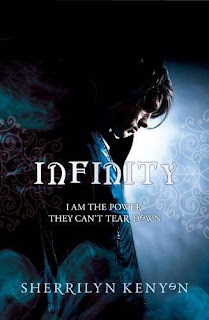 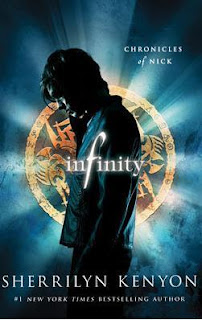 From Goodreads: At fourteen, Nick Gautier thinks he knows everything about the world around him. Streetwise, tough and savvy, his quick sarcasm is the stuff of legends. . .until the night when his best friends try to kill him. Saved by a mysterious warrior who has more fighting skills than Chuck Norris, Nick is sucked into the realm of the Dark-Hunters: immortal vampire slayers who risk everything to save humanity. Nick quickly learns that the human world is only a veil for a much larger and more dangerous one: a world where the captain of the football team is a werewolf and the girl he has a crush on goes out at night to stake the undead. But before he can even learn the rules of this new world, his fellow students are turning into flesh eating zombies. And he’s next on the menu. As if starting high school isn't hard enough. . .now Nick has to hide his new friends from his mom, his chainsaw from the principal, and keep the zombies and the demon Simi from eating his brains, all without getting grounded or suspended. How in the world is he supposed to do that?

Which cover do you prefer?
Posted by I Want To Read That at 12:14

I like both too! Love the guy they've used for it. I can't wait for this one either - I'm counting down the days :D

Thsi is a hard one! I like the shadows on ours and the light coming out of the centre on the US one. I'm undecided!

I really love both and think they're great. The picture of the boy is perfect and mysterious. Makes you want to pick this one up. :)

Definitely the US one - it's amazing!

Very difficult, but think the symbol on the US one just tips it for me.

I'm not feeling very patriotic today. I like the US one best. But actually they are both gorgeous.

Ooooh tough one !
I like the typo and the drawings on the UK, it looks mysterious, but the US is quite impressive...
Mmmh undecided... :-D

The US one, I love the light shining behind him, it's so eye-catching. :D I love the font on the US more too, it looks so well done~