I'd Tell You I Love You, but Then I'd Have To Kill You by Ally Carter 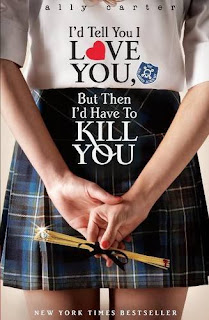 Review Copy. Orchard (6 May 2010)
From Goodreads: The Gallagher Academy for Exceptional Young Women is a fairly typical all-girls school—that is, if every school teaches advanced martial arts in PE, chemistry always consists of the latest in chemical warfare, and everyone breaks CIA codes for extra credit in computer class. So in truth, while the Gallagher Academy might say it's a school for geniuses what they really mean is spies. But what happens when a Gallagher Girl falls for a boy who doesn't have a code name?

This one made me laugh. I liked the School and the whole idea behind it - and I really like the main characters. Cammie was fun and witty and I enjoyed having the story told from her point of view. Her friends Liz, Bex and Macey were great fun too! Especially Bex - she was my favourite and I loved her driving! Josh was interesting but the romance between him and Cammie only had my passing interest. I enjoyed the 'spy' stuff much more.

I admit it's a bit silly at times but I got the impression it wasn't supposed to be taken too seriously. The action scenes were my favourite part - and I liked how they were injected with humour. The final action scene had me laughing out loud.
This is going to be a guilty pleasure of mine. For some reason I feel as if I shouldn't have liked it but I did. I really did - and I can't wait for the next in the series!

Email ThisBlogThis!Share to TwitterShare to FacebookShare to Pinterest
Labels: 4 Stars, Ally Carter, For Review, I'd Tell You I Love You But Then I'd Have To Kill You, Reviews

I much prefered the spying to the romance as well. Glad you enjoyed it!

I agree with you and Sophie. The spying was my favourite part. I thought it was such a light fun read, not too in depth and the school made me giggle. I would love to go to spy school, that would be hilarious!!

I agree too! I thought the spying parts were really imaginative. Great review!

Great review! I really like this version of the cover.

Audrey (holes In My brain) said...

i really want to read this one, it sounds like so much fun :) nice review

Love this cover! I have several girls that have read this series and really enjoyed it. At first I wasn't sure what to make of it until I learned it was a spy school :)

This one sounds very tongue in cheek. Not sure it is my cup of tea but I can see how it would be worthy of a good chuckle.

I also agree that the spying was the best bit! It's such a funny book, with some tissue needing moments. Is it bad that I've preodered the rest of the series?

I absolutely loved this book, and I agree: the spying was definately the best bit! And I know what you mean, about it being a guilty pleasure, and I can't wait to get the rest of the series! Your review was the main reason I got this book, so thank you!