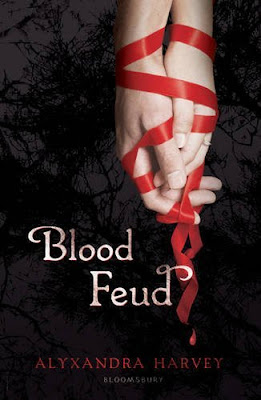 From Goodreads: The action and romance continue as the Drakes face a new vampire with a 200-year-old grudge.

It’s been centuries since Isabeau St. Croix barely survived the French Revolution. Now she’s made her way back to the living and she must face the ultimate test by confronting the evil British lord who left her for dead the day she turned into a vampire. That’s if she can control her affection for Logan Drake, a vampire whose bite is as sweet as the revenge she seeks.

The clans are gathering for Helena’s royal coronation as the next vampire queen, and new alliances are beginning to form now that the old rifts of Lady Natasha’s reign have started to heal. But with a new common enemy, Leander Montmarte—a vicious leader who hopes to force Solange to marry him and usurp the power of the throne for himself—the clans must stand together to preserve the peace he threatens to destroy.

This second adventure in the Drake Chronicles—told from both Logan’s and Isabeau’s perspectives—has all the same butt-kicking action, heart-pounding romances and snarky humor that readers loved in Hearts at Stake, as well as exciting new revelations about the vampire dynasties to keep readers coming back for more.


I can't wait to read Blood Feud by Alyxandra Harvey. It's published July 5th 2010 by Bloomsbury. Anyone who wants a sneak peak can read the first chapter below. A big thanks to Bloomsbury for sending the chapter:)
BloodFeudUKChapter1PDF
Posted by I Want To Read That at 14:00

I can't wait for this, but I don't think I'll read the chapter and torment myself!