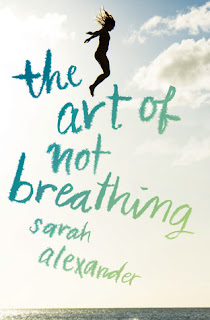 The Art of Not Breathing by Sarah Alexandra

From Goodreads: One minute Eddie was there. And the next he was gone.

Five years on, and it’s Elsie who’s lost. All she knows is the pain she feels. Pain that her twin Eddie’s body has never been found after that day on the beach.

Then she meets Tay; confident, cool and addicted to free-diving. He says it’s too dangerous for her to join; it’s too dark, too scary, too deep. But what does he know?

He doesn’t know that being underwater is the only time Elsie doesn’t ache for her brother. That diving gives her flashbacks. And that uncovering the secrets of that day is the only way for Elsie to start breathing again.

This sounds soooooo good! I want to read it right now! Luckily I don't have too long a wait - it is published 1st Arpil by Usborne (UK) and 26th April (in the US)
Posted by I Want To Read That at 06:00

Email ThisBlogThis!Share to TwitterShare to FacebookShare to Pinterest
Labels: I want to read that..., Sarah Alexandra, The Art of Not Breathing

Just picked up the Temple Wars book! Book 1 is fascinating and had me engaged from page one! You guys should check it out! Temple Wars