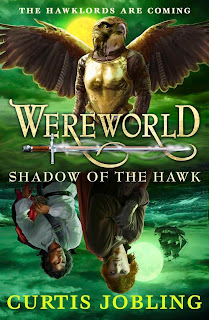 I'm excited to be part of the Wereworld *7 Realms 7 Beasts* Blog Tour - I love the series!  I shall now hand you over to it's author - Curtis Jobling - who is going to talk about Ignus, The Lizardlord. of Scoria...
---

The volcanic island of Scoria is the home to the Lizardlord, Ignus, and his three brothers. In his eighth decade, Ignus’s body has been ravaged after a lifetime of overindulgence. Bald headed, with bulbous, honey-coloured eyes, he cuts a grotesque figure. His reed-thin lips run like a jagged gash across his jaw, impossibly wide, hiding within a host of needle-sharp teeth. Ignus’ neck is overlong and distended, while his oiled, hairless body shimmers with unnatural shades of colour, his therian side rippling beneath the surface, ever present.

Holding gladiatorial games within the Furnace, his fiery arena, the Werelizard will buy anyone for any price to fight for his entertainment, be they human or therianthrope. His relationship with Count Kesslar means that over his long years he has been able to take his pick of the Werelords of Lyssia the Goatlord has stolen from their homelands, each of them meeting the same terrible fate in the Furnace. The prize gladiator for Ignus would be a therian lord of great note, a warrior whose death in the arena would appease the volcanic island his palace sits atop, guaranteeing him a place amongst the gods. What price to pay for the last Grey Wolf of Westland ?

Author’s note: I blame the 80’s TV show, V, for the inclusion of the Werelizards: I remember freaking out as a kid when the aliens in said-seminal-sci-fi whipped off their rubber masks and revealed their reptilian faces beneath. Ignus is a great villain to write for, his preoccupation with death and its myriad combinations making him the most bloodthirsty of bad guys. He’s the first ‘exotic’ Werelord to appear in the pages of SHADOW OF THE HAWK, his arena providing many more to challenge and provoke our hero, Drew Ferran. There’s a connection between the Lizardlords and the other great were-reptile from RISE OF THE WOLF, Vala the Wereserpent, that makes them fun to describe in Drew’s eyes; they’re so much more alien to a boy from the Cold Coast could ever expect to meet, and tap into a deep, primal fear for our main character. It’s worth bearing in mind that although Ignus might be a touch out of shape as Werelords go – a lifetime of excess seeing to that – there’s plenty of bite left in this old reptilianthrope. If Drew’s gets his chance to take down Ignus, he’d better make no mistake. The last thing anyone needs is an enraged, psychotic Lizardlord on their tail...

The next stop on the tour is tomorrow over at The Book Zone (For Boys) . And make sure you check out the Spinebreakers website throughout the week were you can enter their ‘Friday 13th’ ‘Wereworld lucky for some’ competition!