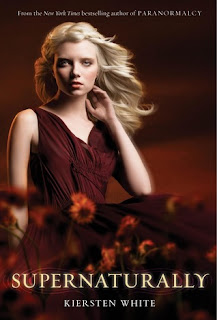 From Goodreads: Evie finally has the normal life she’s always longed for. But she’s shocked to discover that being ordinary can be . . . kind of boring. Just when Evie starts to long for her days at the International Paranormal Containment Agency, she’s given a chance to work for them again. Desperate for a break from all the normalcy, she agrees.

But as one disastrous mission leads to another, Evie starts to wonder if she made the right choice. And when Evie’s faerie ex-boyfriend Reth appears with devastating revelations about her past, she discovers that there’s a battle brewing between the faerie courts that could throw the whole supernatural world into chaos. The prize in question? Evie herself.

So much for normal.

I really like this series.  I love the characters and the world and I was really excited to catch up with them all.

Evie is now living her dream - a normal life.  But despite her love for her locker (!) - not everything is quite how she imagined.  She doesn't feel as if she fit's in and with Lend away at college she doesn't see him as much as she thought.  The only thing keeping her going is getting into the same college as Lend.  But things take an unexpected turn and she is given the chance of working for the IPCA again.  Of course, this means lying to the people around her...

I love Evie, but in this instalment we get to see a different side to her.  She's kind of lost her sass and I really missed it.  On the other hand, I did enjoy seeing her trying to adjust to the 'real' world - she makes some really stupid decisions - but I think by the end she learns from her mistakes.  And I'm glad she is finally completely honest with Lend.

I adore Lend.  He's just so sweet and kind and really there for Evie.  Even when she lies to him and kind of treats him badly.  And I enjoy the two of them together - how they really compliment each other.  She sees him for who he really is - his true self - and Lend helps Evie feel whole.  She seems content when she is with him.

Jack on the other hand is a character I just didn't warm to - perhaps because he kept taking Evie away from Lend.  And there just wasn't enough Reth for my liking!  I really hope we get to see more of him in the next instalment.  And Arianna  is a character I am liking more and more.

The mythology - Evie's history and who she is - is proving very interesting and I can't wait to see how this all ends.  I'll certainly be picking up Endlessly as soon as it's published.

I do like this series...I LOVED Paranormalcy! I was a little disappointed with this one though. I'll still read the next.