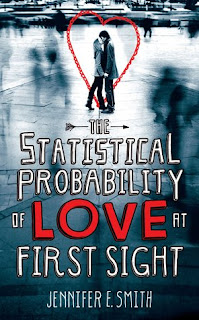 From Goodreads: Who would have guessed that four minutes could change everything?

Imagine if she hadn't forgotten the book. Or if there hadn't been traffic on the expressway. Or if she hadn't fumbled the coins for the toll. What if she'd run just that little bit faster and caught the flight she was supposed to be on. Would it have been something else - the weather over the Atlantic or a fault with the plane?

Hadley isn't sure if she believes in destiny or fate but, on what is potentially the worst day of each of their lives, it's the quirks of timing and chance events that mean Hadley meets Oliver...

Set over a 24-hour-period, Hadley and Oliver's story will make you believe that true love finds you when you're least expecting it.

This is such a sweet story and it's guaranteed to make you smile!

When Hadley misses her flight by minutes she meets Oliver.  The two share an instant connection when they find themselves on the same flight to London. Is it fate that they meet? And is there such a thing as love at first sight?

I loved the connection between Hadley and Oliver. Even when the two parted ways at the airport it constantly played in the background - I kept wondering when they would see each other again..  And I really liked the fact the story has more to it than just the romance.   Don't get me wrong - I loved the romance - but both Hadley and Oliver had things going on in their lives which proved interesting to read about.  I particularly liked the storyline involving Hadley and her father - it was touching to see them try to sort out their troubles.

I also really liked the way this all took place over a 24 hour period.  It makes it feel even more romantic and I can't stop myself from wondering what happens next.  I would definitely love to catch up with Hadley and Oliver!

At just over 200 pages this is a quick read, but a very satisfying one!  I really did enjoy it and would recommend it to all those romantics out there.

tnx 4 reviewing
iwonna have it

I was so pleased that there was some depth underneath the romance as well.