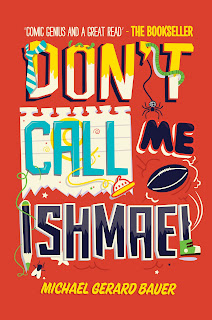 Michael Gerard Bauer is the author of Don’t Call Me Ishamel and he kindly stopped by to talk about the inspiration for the book. I shall now hand you over...
---

The inspiration for my book Don’t Call Me Ishmael is a little weird but it shows that stories can come from anywhere and begin with the tiniest of thoughts. I’ve had stories come from childhood memories, from watching TV, from just a name, and in Ishmael’s case, from a picture. What I’ve discovered is that stories tend to find me, rather than the other way around.

The idea for Don’t Call Me Ishmael started one day when I was writing another story in my study. At one point I stopped and looked at the big notice board beside my desk. One of the many things pinned to it was a still image from the original film version of Herman Melville’s classic novel Moby Dick. It showed Captain Ahab (Gregory Peck) with a harpoon in his hand, clinging to the side of the Great White Whale and desperately trying to seek revenge against it for having torn off his leg in a past encounter.

I’d pinned that picture there years before because I thought it was a powerful and dramatic image and because I’d studied Moby Dick at University and really enjoyed it. (Yes, I could be in the minority here!) Anyway, since I knew the novel well, I was aware of the opening line which is often listed as the most famous opening line in English Literature. As I stared at the picture that opening line came into my head:

These three words are spoken by the narrator of the novel, a sailor called Ishmael. For some reason that day I imagined someone - a boy about 14 - saying the opposite, “Don’t call me Ishmael.” So the story really started just with what ended up being the four words in the title.

The reason that one little thought grew in to a story was because it made me curious and it threw up a lot of questions. Things like, “Why doesn’t this kid Ishmael like his name?” “Why did he parents give him that name in the first place?” “Who is he and what is he really like?”

In answer to that last question, I decided to make Ishmael a bit like I was when I was his age. (It does help to write about what you know.) That’s why, just like me when I was young, he’s terrified about speaking, or even just being, in front of an audience.

Just to give you an example, when I was about 10 I was an altar boy for our local church. But when I first started I was so nervous about being in front of the congregation, I used to faint every Sunday. This wasn’t much fun for me, but the parish priest was happy because a heap of people started coming to church, just to watch me pass out. I was even told that there were two old guys in the back row who used to place bets with each other on how long I would survive every Sunday!

I guess that’s why I gave Ishmael his own very embarrassing and bizarre fainting episode involving a debate, an all girls’ debating team, and a clothes-peg featuring the head of Ringo from the Beatles.

So there you have it. If it wasn’t for Herman Melville’s Moby Dick there would never have been a Don’t Call Me Ishmael.

I owe you one Herman!

Cheers
Michael.
---
Thanks Michael! I loved hearing about the inspiration behind the book - it always amazes me how it can all start with a few words or an idea and just grow from there!

You can find Michael on his Facebook page and on his Blog by clicking the links:)  And don't forget to check out the next stop on the tour tomorrow at Nayu's Reading Corner

Thanks to the lovely team at Templar I have one copy to giveaway. The giveaway is open to UK ONLY and the CLOSING DATE is 7 January 2012. Good luck :D

This Giveaway is now closed.
Posted by I Want To Read That at 06:00