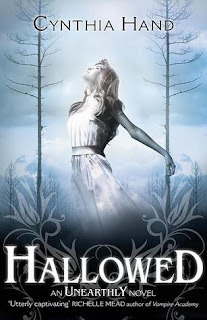 From Goodreads: For months part-angel Clara Gardner trained to face the raging forest fire from her visions and rescue the alluring and mysterious Christian Prescott from the blaze. But nothing could prepare her for the fateful decisions she would be forced to make that day, or the startling revelation that her purpose—the task she was put on earth to accomplish—is not as straightforward as she thought.

Now, torn between her increasingly complicated feelings for Christian and her love for her boyfriend, Tucker, Clara struggles to make sense of what she was supposed to do the day of the fire. And, as she is drawn further into the world of part angels and the growing conflict between White Wings and Black Wings, Clara learns of the terrifying new reality that she must face: Someone close to her will die in a matter of months. With her future uncertain, the only thing Clara knows for sure is that the fire was just the beginning.

Described by Richelle Mead as “utterly captivating,” Unearthly received outstanding reviews, garnered accolades from New York Times bestselling authors, and was named an Indie Next Pick. In this heart-wrenching sequel, Cynthia Hand expertly captures the all-consuming joy of first love—and the agony of loss. This beautifully woven tale will appeal to fans of Lauren Kate, Becca Fitzpatrick, and Aprilynne Pike.

I still can't believe it took me so long to read Unearthly but I didn't make the same mistake with this one - I read it as soon as I had it in my possession. And it is good. Seriously good! In fact I would go as far as to say I loved it even more than Unearthly.

The story pretty much picks up where we left off. Still trying to make sense of her purpose and the aftermath of the fires, Clara finds her life get even more complicated when she gets a new vision - that someone close to her will die. Desperate to prevent this from happening Clara discovers that there is more at stake than she first thought...

I loved Clara in the first instalment and I loved her even more in this one. She has a goodness about her that pulls you in - you can't help but love her. I also still adore Tucker (how I love that boy!) but I got my wish - Cynthia Hand really made me like Christian. He plays a much bigger role this time around and there is a quiet intensity about him that I found compelling. He's there for Clara if she needs him but he also knows when to pull away. Well...almost always.

Jeffrey still has me worried. There is something going on with him - and I have the feeling it's not good. Plus we get a lot of revelations in this one and I'm embarrassed to say I saw none of them coming! I honestly cannot wait to see how this all plays out!  And, of course, I'm still holding onto my hopes for Clara and Tucker. And I'm definitely going to have my tantrum if they don't end up together - and this is why:  It's Tucker who sees Clara for her. Who she is - angel and human. Christian didn't see her at all until he knew who (and what) she was. Sure he was polite and nice but he just didn't seem interested.  That doesn't mean I don't think Christian cares - I do - I just love the fact that Tucker noticed her straight away.  And despite that awful red hair...

So I can't wait to get my hands on the next book - and have no idea how I'm going to wait until 2013!  It's complete torture!  I can't wait to get back into this world.  Really -  if you haven't picked up this series yet - please do. It's fantastic!

I started reading it last night and I admit, I was nervous because I loved Unearthly so much. But no need. I'm addicted!