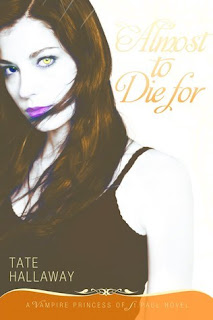 Almost to Die For (A Vampire Princess of St. Paul, #1) by Tate Hallaway

From Goodreads: On her sixteenth birthday, Anastasija Parker's present winds up being the shock of a lifetime. When her mom referred to her absentee dad as a deadbeat it was actually half true -- he's a vampire. And a king, no less. A king who wants his daughter to assume her rightful position at his side. But, thanks to Ana's mother, the blood of a witch also runs through her veins....

Too bad vampires and witches are mortal enemies.

With her parents gearing up for an all out brawl over her destiny, Ana's about ready to scream. But things get even crazier when a male witch and a brooding bad boy vampire start vying for her affection. Then the barely leashed tension between the vampires and the witches starts to boil over, and Ana has to figure out once and for all if she wants to become heir to her dad's throne. And deciding your eternal destiny is a pretty big deal for a girl who just wants to get through high school.

Sounds good! Not loving the cover though:( It is published 3 August in the US. No UK publication date yet. EDIT: Amazon is showing a much nicer 'blue' version of the cover:) - see here.
Posted by I Want To Read That at 12:51

Email ThisBlogThis!Share to TwitterShare to FacebookShare to Pinterest
Labels: Almost to Die For, I want to read that..., Tate Hallaway

Ooh, it sounds good. Thanks for this! I quite like the purple lippie myself... :)

The blurb is fab but I agree the cover is naff!

o.O No UK publication date? I hope it makes it here!

I saw the word 'vampire'. Count me in!

Though vampires are so passe to me right now, I love the blurb...not so much the cover haha :)

ohh, I really like the cover
and halfling stuck in the middle of a war sounds pretty interesting too =)

I think this sounds fun! I actually don't even mind the cover. I've never heard of this one before, so thanks for the heads up!