I got a bit carried away this week with the book buying it seems... 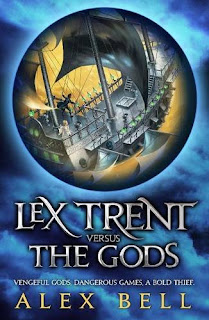 Wonderful books! Ooh, is Daughter of Fire and Ice out now? I've been waiting for the release! And wow, you've got When I Was Joe! I hope you enjoy it - and all these great books!

What a great week! I personally can't wait to read Lex Trent - it looks so good!

Daughter of Fire & Ice looks amaaazzzinggg! Oh, and there's nothing wrong with incessantly buying books, in my opinion :)

Looks like an awesome week, even if you were carried away! I loved When I Was Joe, and I'm pretty desperate to read Need, The Mark and Some Girls Are too - so that adds up to an amazing collection of books. I really hope they're all as good as they sound!

Some Girls Are looks awesome - I hope you enjoy it and I cant wait to read your review!

There is absolutely nothing wrong with getting carried away in a bookstore... that's what I tell myself, anyway! :) Enjoy your great haul this week.

I'm looking forward to you reviews of When I Was Joe and Daughter of FIre and Ice. Both are great books.

Fab books! Need, Ghost Huntress, Need, When I Was Joe and DEmon Princess are all amazing. Hope you enjoy them as much as I did!

Oh me, oh my! Some fabulous books this week. Can't wait to hear what you think of The Mark. If you like it, I'll buy a copy. It sounds just my kind of book. Lex Trent...I have it too. I can't imagine loving it but you never know.

OMG, you got so many and awesome books this week! Hope you have fun reading them. :)

I want the mark so bad. Such a pretty cover. I really am distracted by pretty covers. Typical me. Anyway good books this week. Hope you enjoy.

When I Was Joe looks very enticing, gonna look that up =)

There is nothing wrong with getting carried away at the book store... umm, I do the same. lol. I hope you enjoy all of your books! :)

Oh gosh, I forgot about Daughter of Fire and Ice. I had seen it somewhere before and it looks so good. Have to make a note of it to get it from the Book Depository. Happy reading!

Nice selection - I'll be looking forward to your reviews :o)

ohhh wow, you got some really fab books this week. I especially loved Some Girls Are it's brilliant

These look terrific! I hope you enjoy all your books.

These all look really good books, I got some of them too :)

I love the cover of Fairy Tale! That alone would make me want to read it. Sad, I know.