Fifteen Days Without a Head by Dave Cousins 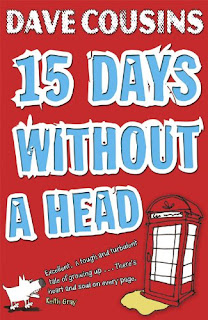 From Goodreads: Fifteen-year-old Laurence Roach just wants a normal life, but it's not easy when your mum is a depressed alcoholic, and your six-year-old brother thinks he's a dog. When Mum fails to come home one night, Laurence tells nobody, terrified he and his brother will be taken into care if anyone finds out. Instead, he attempts to keep up the pretence that Mum is still around: dressing up in her clothes to trick the neighbours and spinning an increasingly complicated tangle of lies. After two weeks on their own, running out of food and money, and with suspicious adults closing in, Laurence finally discovers what happened to his mother. And that's when the trouble really starts . . .

A compelling thriller filled with some hilarious and surreal moments. Fifteen Days Without a Head is a tender, honest story about family, forgiveness and hope.

I've had the feeling I would really enjoy this one ever since hearing the author read an excerpt at an event last year.  It's a fantastic debut - humorous and poignant - I loved every minute.

The story follows Laurence and his brother Jay when their mother doesn't come home from work.  Scared that they will be separated again, Laurence does everything in his power to hide his mother's absence from the authorities.  But with an incredibly nosey neighbour and money running out will Laurence find his mother before it's too late?

I loved the characters in this - Cousins really managed to bring them all to life.  Laurence was someone I invested in straight away - he's kind, considerate and is amazing with his younger brother.  Jay is absolutely adorable - I loved how he constantly pretended to be a dog!  And I even felt for their mother.  I loved how she was a three dimensional character too - someone I rooted for as much as Laurence and Jay.  I wanted her to get better - to be able to be there for her family.

I also really enjoyed the budding friendship Laurence develops with Mina.  She's great - fun and sassy - plus she is there when Laurence really needs her.  I also loved the way she is with Jay.  And the way she fits into their 'Scooby gang' as Velma.  I really loved all the Scooby references - they way it made Laurence and Jay a team - and how they used it to try and solve where there mother had gone.

I did find it interesting that in reading this book from an adult perspective I felt uncomfortable that they could hide what was happening for so long.  I think it's interesting that the people who are supposed to be those that can help are actually the ones these kids fear - the idea of being separated from each other fuels their need to hide what is happening from the authorities - even at a risk to themselves.  But at the same time I was rooting for them and for their mother to sort herself out.  You can see through Laurence's memories that she is a caring person - but that she has her own demons to face - and essentially that she needs help.  It doesn't excuse what she does - has done - but it made her someone I really felt for.

This is a gem of a book - funny, realistic - I didn't want to put it down.  I'm super excited to see what Dave Cousins writes next.

Email ThisBlogThis!Share to TwitterShare to FacebookShare to Pinterest
Labels: 15 Days Without a Head, 4.5 Stars, Dave Cousins, For Review, Reviews

I agree. I thought this was a brilliant book and both hilarious and terribly sad!