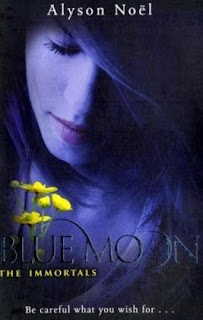 Review Copy: Macmillan. Available now
From Goodreads: Things have changed for Ever since she met her beloved Damen - not least because she's got a whole new set of powers, courtesy of her new Immortal status. Just as she's getting stronger, though, Damen seems to be weakening. Panicked at the thought of losing him, Ever finds a path to the in-between world known as Summerland, where she learns the secrets of Damen's tortured past. But in searching for a cure for him, Ever accidentally discovers a way to twist time so she can save her family from the accident that killed them. It's all she's ever wanted - but so is Damen. And Ever must choose between them...

I really enjoyed Evermore. I felt it was unique and was a great start to the series. As such, I had high expectations for Blue Moon.

While I liked it overall I have to admit I found this one really hard to get into at first. That's not to say I didn't enjoy it - while I was reading it I liked it. The problem was as soon as I put it down I found I was not compelled to pick it back up again, finding myself reading something else instead. Once I got about half way through the book things completely changed. It was as if someone had flicked a switch and I raced through the rest of the novel, not stopping once! I think this is because Ever started to take control and regain some of the sass she was lacking in the first part of the story - to begin with it was as if she was just reacting to everything instead of trying to find a way to change it.

Ever is a great character and even though I sometimes get frustrated with her I really like her and enjoy taking the journey with her. The story itself is intriguing - I enjoyed finding out about Damen's history and about Summerland, and considering how this installment ends I am now very interested to see how things pan out in the next book. I am glad I persevered because the second half was fantastic! It's a shame it didn't grab me from the start but it definitely ended on a high and I'm looking forward to Shadowland when it's published.

I loved this and was really annoyed by the ending, but although I have Shadowland ready and waiting, I have no drive to read it. Weird, huh?

I just wanted to let you know that I have an award for you at my blog. You can view it here!

Wow you liked it! I have heard so many mixed reviews about this book, well actually most where negative, that I decided not to read it. Just way too many other great books with this genre out there. But when I see them on sale, I probably buy them. :)

I really do hear mixed this about this series and I do have the first two books but as you know my TBR pile is starting to resemble a mountainous region so I wonder when I'll ever get around to it. Your review doesn't encourage me to drop everything and pick it up but then I am reading The World We Live In....