A Walk to Remember by Nicholas Sparks 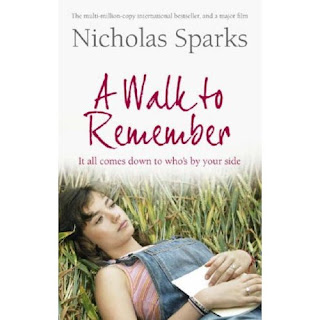 From Goodreads: In 1958 Landon Carter is a shallow but well-meaning teenager who spends most of his time hanging out with his friends and trying hard to ignore the impending responsibilities of adulthood. Then Landon gets roped into acting the lead in the Christmas play opposite the most renowned goody two-shoes in town: Jamie Sullivan. Against his best intentions and the taunts of his buddies, Landon finds himself falling for Jamie and learning some central lessons in life.

Although technically an adult novel, I though this would have great cross-over appeal. I love the film adaptations of Nicholas Sparks' novels (The Notebook being my all time favourite!) so I had to read one. I love his writing style - I have a tendency to read mostly female authors so this was a pleasant change that didn't disappoint. The story is set in the late 1950's and you really get a sense of that time period, which adds depth to both the story and the characters. I found myself very invested in them and their story - both characters being very likeable and well developed. I don't want to give too much away except to say you might need to have tissues on hand! I really enjoyed it and look forward to reading more novels by the author.

I haven't seen this version of the cover before. I really love this book though, it's one of my favourites..

I loved the film (sniffle) but haven't read the book yet. I agree with you about The Notebook - that film is amazing. I thought the book was okay too!

This one of my favourite of his books. Glad you enjoyed it!