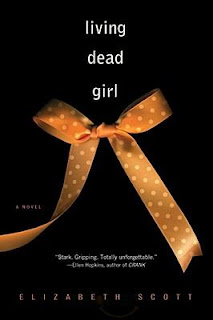 From Goodreads: Once upon a time I was a little girl who disappeared. Once upon a time my name was not Alice. Once upon a time I didn't know how lucky I was. When Alice was ten, Ray took her away from her family, her friends -- her life. She learned to give up all power, to endure all pain. She waited for the nightmare to be over. Now Alice is fifteen and Ray still has her, but he speaks more and more of her death. He does not know it is what she longs for. She does not know he has something more terrifying than death in mind for her. This is Alice's story. It is one you have never heard, and one you will never, ever forget.

I knew this wasn’t going to be an easy read but I wasn’t completely prepared for how brutally realistic it was going to be. I loved Bloom and was astonished that this was written by the same author – it was just so different. It was beautifully written though, almost like verse in a way, and I truly believed in Alice’s voice. I had so many emotions while reading it – horror, sympathy, hatred, unease and for some reason guilt. It almost felt as if I was reading something I shouldn’t really be reading – which in itself is testament to Scott’s talent as a writer.
The story is devastatingly sad. It scared the hell out of me too and I realised that Alice’s three rules - No one will see you. No one will say anything. No one will save you - are unfortunately true. How many times do we ‘not see’ the things we don’t want to see? How many times to we not want to get involved? It also gave me an insight into abuse that I had never really considered. I have never understood why someone would stay, would not tell someone what was happening – but I didn’t really understand the impact of fear as a motivator. I realised after reading this though that fear for oneself is not the only type of fear – the threat against her family was so strong I could understand why it had the impact it did and it terrified me that essentially love can be used against you in this way. It also scared me that I could see signs in Alice that she too had the potential to become an abuser – how that the need to escape, to not be abused anymore overtook everything else.
Would I recommend this book? Hell yes! It’s not the most comfortable read but Elizabeth Scott does an outstanding job bringing the story alive. It was absolutely heartbreaking to read but Alice will be a character I remember for a long time.

Great review! I absolutely loved this book - it's my favourite by Elizabeth Scott. It's sad, disturbing and heartbreaking, but amazingly written.

I don't think I could read this book. It sounds amazing but I think it would just horrify me. But maybe that is the reason I should read it...good books challenge us. Hmmm....
A wonderfully, thought provoking review!

I don't think I could read this book either, despite being a huge Elizabeth Scott fan.

I loved reading your review, though - thank you!

I love this book, simply because how excellently written it was - it was the first ES book I read, so reading her other novels was a nice break. ;]