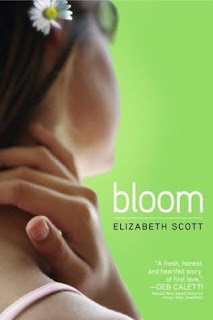 From Goodreads: There's a difference between falling and letting go. Lauren has a good life: decent grades, great friends, and a boyfriend every girl lusts after. So why is she so unhappy? It takes the arrival of Evan Kirkland for Lauren to figure out the answer: She's been holding back. She's been denying herself a bunch of things (like sex) because staying with her loyal and gorgeous boyfriend, Dave, is the "right" thing to do. After all, who would give up the perfect boyfriend? But as Dave starts talking more and more about their life together, planning a future Lauren simply can't see herself in -- and as Lauren's craving for Evan, and moreover, who she is with Evan becomes all the more fierce -- Lauren realizes she needs to make a choice...before one is made for her.

I really enjoyed reading Bloom. Elizabeth Scott is a fantastic writer and managed to create some very complex and layered characters. The plot was easy to get lost in and Laureen had a great voice – I found her to be a very likeable character even though she didn’t always do the most likeable things. I could understand her actions though – I felt she tried so hard to be the ‘perfect’ person she thought people wanted her to be that she didn’t want to do anything to change that. And although I don’t think it made her happy I think it made her safe. Evan, of course, changes all that. There were some really lovely moments between the two of them – I epecially liked the whole boxset incident. I was impressed that the plot wasn’t a straight forward love story – all the characters were three dimensional and I was equally interested in all their stories. In fact, a slight complaint would be that some story lines were not tied up in the end – Katie's story being one of them. I would really like to find out what happened with her.

Great review - thanks! Oh, I loved this book. I'm reading Elizabeth Scott books back-to-back at the moment. I love them all!

My favourite is Living Dead Girl - have you read that one? It's completely different to her light romance books, but it is absolutely amazing. I was thinking about it for days after I finished it!