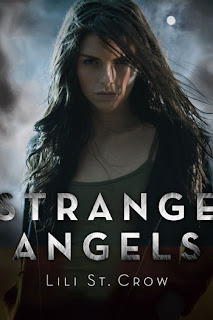 Strange Angels by Lili St Crow (woo hoo!)
From amazon: Dru Anderson: Night Hunter. Knife Wielder. Heart Breaker. Dru can sense evil, which helps when she and her Dad are tracking down ghosts, suckers, wulfen, and the occasional reanimated corpse. It's a dangerous life, but it's the only one she knows. Then Dru's dad turns up dead and she suddenly finds herself in the middle of a deadly game where every move she makes could be her last. Dru is more special than she realizes - and whatever killed her dad could be coming for her next. Can Dru stay alive long enough to fall for one - or both - of the guys hungry for her affections? Find out in the heart-stopping first book in a thrilling series. 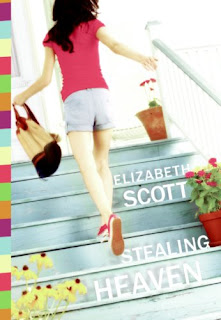 Stealing Heaven by Elizabeth Scott
From Goodreads: My name is Danielle. I'm eighteen. I've been stealing things for as long as I can r emember. Dani has been trained as a thief by the best - her mother. Together, they move from town to town, targeting wealthy homes and making a living by stealing antique silver. They never stay in one place long e nough to make real connections, real friends - a real life. In the beach town of Heaven, though, everything c hanges. For the first time, Dani starts to feel at home. She's making friends and has even met a guy. But t hese people can never know the real Dani - because of who she is. When it turns out that her new friend lives in the house they've targeted for their next job and the cute guy is a cop, Dani must question where her loyalties lie: with the life she's always known - or the one she's always wanted.

I got Strange Angels a few weeks ago. Happy Reading!

Awesome books you got this week. They both look really good. Hope you enjoy reading all your books.

I love the books you got! Strange angels sounds very good and exciting.
Have fun reading the books.

I haven't read Stealing Heaven, but it looks like an interesting read, I'll add it to my list. Happy reading!

SA is a cool book (very Buffy), and Elizabeth Scott is a fantastic writer. Have fun with these two!

'Stealing Heaven' looks good, I'm adding it to my TBR.

BTW it looks like we have a lot of similar book interests so I'm following now :]

^visit my blog also, & enter for a chance to win 'Summer Boys' by Hailey Abbott! :]

I just finished reading Stealing Heaven and it was really good. I liked how Elizabeth Scott really incorporated a lot of the ways the mother and daughter tandem did their job. Clear descriptions of how they are going to steal and how they stole. It's also heartwarming because you can see Danielle's progress in the decisions she's making.