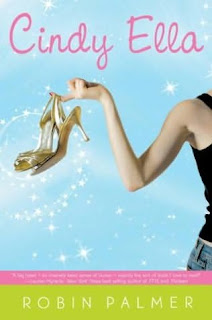 From Amazon: Prom fever has infected LA—especially Cindy’s two annoying stepsisters, and her overly Botoxed stepmother. Cindy seems to be the only one immune to it all. But her anti-prom letter in the school newspaper does more to turn Cindy into Queen of the Freaks than close the gap between the popular kids and the rest of the students. Everyone thinks she’s committed social suicide, except for her two best friends, the yoga goddess India and John Hughes–worshipping Malcolm, and shockingly, the most popular senior at Castle Heights High and Cindy’s crush, Adam Silver. Suddenly Cindy starts to think that maybe her social life could have a happily ever after. But there’s still the rest of the school to deal with. With a little bit of help from an unexpected source and a fabulous pair of heels, Cindy realizes that she still has a chance at a happily ever after.
This is a charming modern day retelling of Cinderella. Cindy Ella is delightful character and endeared herself to me from the start. She seems to have the knack of getting herself into embarrassing situations on a regular basis which added to the humour in the novel. I loved her friends too, and her baby brother Spencer was just adorable. The John Hughes movie references were an added plus for me as I am a big fan of those movies. Granted, the story was on the predictable side, but that wasn't necessarily a bad thing. It was fun waiting for Cindy to work it out - and her reaction when she does is priceless! I thought the ending was really sweet and it left a very goofy smile on my face.
Overall a great light hearted read - I've added Geek Charming to my to buy list.

This sounds really cute! I'm reading Ash at the moment, so it would be fun to read another Cinderella retelling afterwards.

This does sound like a fun book, will have to add it to my list too. Thanks for the review!

Hm, sounds like a light-hearted, easy read. I'll have to see if I can read it sometime, thanks! (: