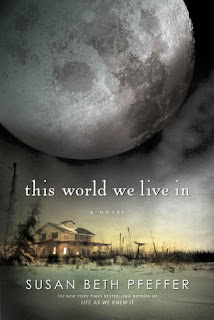 This World We Live In by Susan Pfeffer
From Goodreads: It's been over a month since Miranda Evans has written in her diary, a month of relative calm for her and her family. It's springtime, and with warmer weather comes rain, and the melting of the winter's snow. The shad are running in a nearby river, and Miranda's brothers Matt and Jon leave home for a few days to see if they can catch some to supplement their food supply. When they return, Matt brings with him a girl named Syl, who he introduces as his bride. But that's not the only shock Miranda and her family have to deal with. A few weeks later, Miranda's father, stepmother, and baby brother show up at her door. Accompanying them are three strangers, a man named Charlie Rutherford, and two teenagers, Alex and Julie Morales. These five people have crossed America together, becoming, in their own way, a family. Miranda's complicated feelings about Alex, curiosity, resentment, longing, and passion turn into love. Alex's feelings are equally complex. His plans to escort Julie to a convent where she can be taken care of, so that he will be free to enter a monastery, are destined for failure. He wants desperately to live up to his moral code, but his desire for Miranda is too strong. He proposes to Miranda that they take Julie and go to a safe town. But before Miranda and Alex can go off together, a devastating tornado hits the town of Howell, and in its aftermath, Miranda makes a decision that will change forever her life and Alex's, and the world that they live in will never be the same.
I can't wait for this! It is published in the US 1st April 2010. There is no UK date yet (Grr!)
Posted by I Want To Read That at 19:31

The book really sounds great and i love the title: This World We Live In!!

I want to read this too! I love the fact that the protags from the first two books in the sequence will be interacting.

I keep meaning to get myself a copy of Life As We Knew It but I haven't got around to it yet. I love dystopias. Thanks for reminding me Sammee. I think I'll reserve a copy from my public library.

I bought the first book a year ago, and still haven't read it.

I wanna read this one too. I read the first two. Both were great!

omg! i loved the first one, it was great!