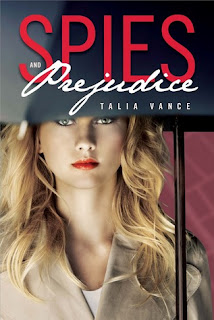 Spies and Prejudice by Talia Vance

From Goodreads: Fields’ Rule #1: Don’t fall for the enemy.

Berry Fields is not looking for a boyfriend. She’s busy trailing cheaters and liars in her job as a private investigator, collecting evidence of the affairs she’s sure all men commit. And thanks to a pepper spray incident during an eighth grade game of spin the bottle, the guys at her school are not exactly lining up to date her, either.

So when arrogant—and gorgeous—Tanner Halston rolls into town and calls her “nothing amazing,” it’s no loss for Berry. She’ll forget him in no time. She’s more concerned with the questions surfacing about her mother’s death.

But why does Tanner seem to pop up everywhere in her investigation, always getting in her way? Is he trying to stop her from discovering the truth, or protecting her from an unknown threat? And why can’t Berry remember to hate him when he looks into her eyes?

With a playful nod to Jane Austen, Spies and Prejudice will captivate readers as love and espionage collide.

On Amazon this is being described as 'Pride & Prejudice meets Veronica Mars...'  So yes, I'm sold!

Email ThisBlogThis!Share to TwitterShare to FacebookShare to Pinterest
Labels: I want to read that..., Spies and Prejudice, Talia Vance

I love anything related to Jane Austen so this is a must-read for me too!