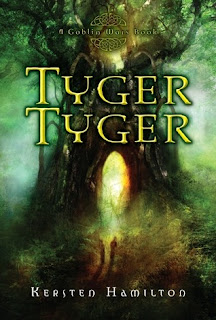 From Goodreads:  Teagan Wylltson's best friend, Abby, dreams that horrifying creatures--goblins, shape-shifters, and beings of unearthly beauty but terrible cruelty--are hunting Teagan. Abby is always coming up with crazy stuff, though, so Teagan isn't worried. Her life isn't in danger. In fact, it's perfect. She's on track for a college scholarship. She has a great job. She's focused on school, work, and her future. No boys, no heartaches, no problems.

Until Finn Mac Cumhaill arrives. Finn's a bit on the unearthly beautiful side himself. He has a killer accent and a knee-weakening smile. And either he's crazy or he's been haunting Abby's dreams, because he's talking about goblins, too . . . and about being The Mac Cumhaill, born to fight all goblin-kind. Finn knows a thing or two about fighting. Which is a very good thing, because this time, Abby's right.

The goblins are coming

This one really caught my attention. Kersten Hamilton infuses it with Irish mythology and creates a really tense and action-packed story.

The book worked for me on so many levels. It has great mythology and brilliant characters - I think it was here that Hamilton excelled. I loved them all and really liked the family atmosphere she creates. Teagan was interesting as the main character – very easy to like and comes across as intelligent and kind – and of course I loved Finn Mac Cumhaill! At first he’s quite mysterious but as the book progresses more and more is revealed about him. I also adored Aiden and his relationship with his sister - Super sweet! And Abby was great fun – I definitely want more of her in the next book.

The mythology feels fresh and different. I loved everything about it – and it really does have some very tense and scary moments. Cat-sidhes are now forever etched in my brain as rather terrifying! There are also some standout action scenes and moments when I found myself completely gripped by everything that was happening. It’s one of those books that I found hard to put down – I wanted to finish it in one sitting. All of this is grounded by the characters - their banter is fun and the basis for some really witty moments.

There is a time jump about 100 pages in that makes the book feels as if it’s split into two parts. The first ‘half’ concentrates on building the world and characters - which may make the story hard to get into for some. However, I felt this paid off in the second half of the book – and I loved how all the pieces fitted together in the end. Everything we learn in that first half makes all that happens afterwards work – so it’s definitely worth it. And the second ‘half’ really hits the grown running – it really took me by surprise in its change of pace and sense of urgency. This was when I found myself really not wanting to put it down!

My only complaint is I found the slight time jump jarring. Because of what happens in the scene before it I found myself still dealing with that when the characters had already moved on. It made it feel as if the characters were not as upset as they should be – but it does move the story to where it needs to be.

I’m really looking forward to the next installment. I want to get back into the world Hamilton has created – and (unsurprisingly) I really want more time with Finn!

I was really excited for this book and then my excitement stated to dim after heard a few so-so reviews. Your review jump started my excitement again and now I can't wait to read it. Thanks! It's also really good to know about the time jump mid-way through. I don't think any of the other reviews I read mentioned that.

I'm so glad you liked Tyger Tyger, Sammee! I am really, really excited that it is out in 'the wild' this week and anyone can read it.

This one is on my wish list. Thanks for the review!