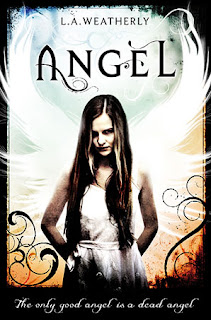 From Goodreads:  In a world where angels are beyond redemption, Alex thinks he's found one that might deserve mercy. Alex is a ruthless assassin - of angels. Forget everything you've heard about them before. Angels are not benign celestial creatures, but fierce stalkers whose irresistible force allows them to feed off humans, draining them of their vitality until there is barely anything left. As far as Alex is concerned, the only good angel is a dead angel...until he meets Willow. She may look like a normal teenager but Willow is no ordinary girl. Half-angel, half-human, Willow may hold the key to defeating the evil angels. But as the hunter and the hunted embark on an epic and dangerous journey and Willow learns the dark and terrifying secrets of her past, Alex finds himself drawn to Willow...with devastating consequences. Eoin Colfer reinvented the fairy, Stephenie Meyer reinvented the vampire, L.A. Weatherly reinvents the angel! This is a heart-pounding, knuckle-whitening, paranormal romance action-adventure for fans of the "Twilight" series. This is the first in a devastating new trilogy.

To say I loved this book would be a massive understatement.  It completely and utterly blew me away! I just loved everything about it, and yes, Alex is definitely a major plus!

The story follows Alex and Willow.  Alex has been raised as an AK (or Angel Killer) and, as such, knows the truth about Angels.  They are really feeding off human energy, draining them until there is nothing left, and must be stopped.  But when Alex is sent information to kill Willow he is confused - because Willow is not like any Angel he's met before - she's also human...

I really liked how the story alternates between Willow and Alex.  I've said in the past I really enjoy this style of narration and it works really well here.  It's easy to distinguish between the two voices - helped by the authors switch from first person narratiive for Willow to a third person narration for Alex's parts of the story.  I loved both characters from the get-go.  Alex has that 'Dean Winchester' thing going for him - or at least he did for me.  I spent a great portion of this novel itching to watch my Supernatural DVD's- but the book was too good to put down so I easily resisted!  He's just... I can't quite put my finger on it but I just adored him.  And Willow was a character that had me rooting for her right from the start.  Really likeable, caring and strong.  I could also picture the two of them together - so it was very easy for me to buy into their relationship as it progresses.

Weatherly has a very accessible writing style and a skill for writing both high action scenes and slower, more character driven ones.  I was suprised by how much story is packed in to this book.  There's loads of action, an epic love story and the mythology is just brilliant!  The whole thing is such an adrenaline rush!  So much happens that I just didn't see coming - I spent large portions of the book going 'Whoa!'or 'OMG!' and then the rest sighing (Te Amos Alex!) because the romance is soooo good!

I apologise for the rather fan-girl review but I really can't recommend this one highly enough!   I can't wait for the next in the series -  role on June!

Have I convinced you?  Well, I have a signed copy up for grabs:)

If you want to enter just fill in the form below.  Contest is open to everyone and the deadline for entries is 18 November 2010.  Good Luck:-)

This giveaway is now closed. The winner will be contacted shortly.
Posted by I Want To Read That at 06:00

You had me at "He has that 'Dean Winchester' thing going for him.' MUST READ IT! Honestly, majority of reviews are positive about this book, and I can't wait to get into it.

I have a copy on my Kindle which I can't wait to get to. Great review. Hope I'm as blown away with it as you.

You have definitely convinced me! Putting this on my wishlist right away! Great review :)

wow, that really sounds great. I like it. Thank you for holding the awesome contest/give away! :)

Fab review Sammee, I'm so glad you liked this one as much as I did :o) I adored Alex!!!!

I want, I want, I want! I'm with Dazzling Mage - you had me at 'Dean Winchester'! I love the sound of this book and your review makes me want to dive into it 10 times more. Thanks for the opportunity to win it - especially for us international folk too!

thank you for the contest, and i loved your review!

5 stars! I'm so glad you enjoyed this because I am really looking forward to it