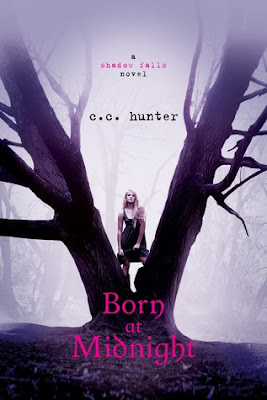 From Goodreads: Kylie Galen has had a lot of crap tossed in her lap. Her parents are getting a divorce. Her boyfriend broke up with her because she wouldn’t put out. Her grandmother died and now Kylie’s acquired a stalker. Unfortunately, she’s the only one who seems to be able to see the stalker. And that gets her sent to a psychologist’s sofa.

The kooky psychologist gets Kylie sent to Shadow Falls Camp. Kylie and her parents think it’s a camp for troubled teens.

It’s a camp of supernaturals: vampires, werewolves, fairies, witches and shape shifters. And if she believes the camp leader, Kylie is one of them, too.

Just because she’s seeing ghosts, just because she was born at midnight, does that really mean she’s not human? And if so, what is she? Not even the other supernaturals can tell her.

As Kylie attempts to cope with the realization that these creatures actually exist, and that she might even be one of them, the ever present stalker/ghost appears to have secrets that could unravel the mystery of Kylie’s identity and her destiny.

But getting a ghost to open up is as hard as getting a guy to talk about his feelings.

As Kylie struggles to find answers, two hot guys, a werewolf and a half-fairy vie for her attention. However, Kylie’s determined that before she lets her heart discover a new love, she needs to solve her indentify crisis and unearth the truth of her destiny.

Email ThisBlogThis!Share to TwitterShare to FacebookShare to Pinterest
Labels: Born at Midnight, C C Hunter, I want to read that...

I like the sound of this one too, and the cover is kinda creepy!

I've not heard of this one before, but it does sound good :)