From Amazon: Grace is fascinated by the wolves in the woods behind her house; one yellow-eyed wolf in particular. Every winter, she watches him but every summer, he disappears. Sam leads two lives. In winter, he stays in the frozen woods, with the protection of the pack. In summer, he has a few precious months to be human . . . until the cold makes him shift back again. When Grace and Sam finally meet they realize they can't bear to be apart. But as winter nears, Sam must fight to stay human - or risk losing himself, and Grace, for ever.


From Goodreads: Once upon a time I was a little girl who disappeared. Once upon a time my name was not Alice. Once upon a time I didn't know how lucky I was. When Alice was ten, Ray took her away from her family, her friends -- her life. She learned to give up all power, to endure all pain. She waited for the nightmare to be over. Now Alice is fifteen and Ray still has her, but he speaks more and more of her death. He does not know it is what she longs for. She does not know he has something more terrifying than death in mind for her. This is Alice's story. It is one you have never heard, and one you will never, ever forget.

Take me There by Susane Colasanti

From Goodreads: In one short week . . . three lives change. Rhiannon is devastated after the breakup with her boyfriend and wants him back. Nicoles ex is still in the picture, but she can't help having a new crush. James and Rhiannon are just friends, though he may try to take it to the next level. Will their desire to take a mean girl down a notch bring these three friends what they want . . . and more?

The Awakening by Kelley Armstrong

From Amazon: Chloe Saunders used to be a normal teenage girl - or so she thought. Then she learned the shocking truth - she is a walking science experiment. Genetically altered at birth by a sinister group of scientists known as the Edison Group, Chloe is an aberration - a powerful necromancer who can see ghosts and even raise the dead, often with terrifying consequences. Even worse, her growing powers have made her a threat to the surviving members of the Edison Group, who have decided it's time to end their experiment - permanently ...Now Chloe is running for her life with three other supernatural teenagers - a charming sorcerer, a troubled werewolf and a temperamental young witch. Together they have a chance for freedom - but can Chloe trust her new friends? 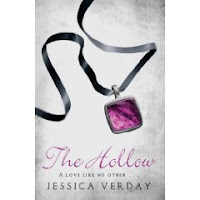 The Hollow by Jessica Verday

From Amazon: Growing up in the town of Sleepy Hollow, the mystery and intrigue over Washington Irving's classic legend are all part of daily life for sixteen-year-old Abbey. But when her best friend, Kristen, vanishes at the bridge near Sleepy Hollow Cemetery, Abbey's world is suddenly turned upside down. While everyone is all too quick to accept that Kristen is dead, Abbey refuses to believe that she is really gone. And when Abbey meets the gorgeous, but mysterious, Caspian at Kristen's memorial she starts to feel like she has something to hold on to for the first time since Kristen's disappearance. But when Abbey finds a diary hidden in Kristen's bedroom, she begins to question everything she thought she knew about her best friend. How could Kristen have kept silent about so much? And could this secret have led to her disappearance or even her death? Hurt and angry at Kristen's betrayal, Abbey turns to Caspian for support...and uncovers a frightening truth about him that threatens both their emerging love and her sanity...

The Disreputable History of Frankie Laudau-Banks by E Lockhart

From Goodreads: Frankie Landau-Banks at age 14: Debate Club. Her father’s “bunny rabbit.” A mildly geeky girl attending a highly competitive boarding school. Frankie Landau-Banks at age 15: A knockout figure. A sharp tongue. A chip on her shoulder. And a gorgeous new senior boyfriend: the supremely goofy, word-obsessed Matthew Livingston. Frankie Laundau-Banks. No longer the kind of girl to take “no” for an answer. Especially when “no” means she’s excluded from her boyfriend’s all-male secret society. Not when her ex boyfriend shows up in the strangest of places. Not when she knows she’s smarter than any of them. When she knows Matthew’s lying to her. And when there are so many, many pranks to be done. Frankie Landau-Banks, at age 16: Possibly a criminal mastermind. This is the story of how she got that way.

From Amazon: Cassie is in Year 10 at Ashbury High. Ashbury students claim that the kids at Brookfield High are drug-dealers and psychopaths. Their teacher starts a pen-pal project which leads to an escalation of the war between the two schools, to secret romance and to Cassie learning to face her fears.

From Goodreads: There were no surprises in Gatlin County We were pretty much the epicenter of the middle of nowhere. At least, that’s what I thought. Turns out, I couldn’t have been more wrong. There was a curse. There was a girl. And in the end, there was a grave. Lena Duchannes is unlike anyone the small Southern town of Gatlin has ever seen, and she’s struggling to conceal her power, and a curse that has haunted her family for generations. But even within the overgrown gardens, murky swamps, and crumbling graveyards of the forgotten South, a secret cannot stay hidden forever. Ethan Wate, who has been counting the months until he can escape from Gatlin, is haunted by dreams of a beautiful girl he has never met. When Lena moves into the town’s oldest and most infamous plantation, Ethan is inexplicably drawn to her and determined to uncover the connection between them. In a town with no surprises, one secret could change everything.

I got Shiver too, but I'm promising myself I won't read it until I've cleared my TBR pile a little bit. I definitely want to read The Hollow too. That looks like a great week!

Living Dead Girl sounds really scary. I haven't come across it before. It reminds me a bit of the Collector by John Fowles which I had to read for A Level. I look forward to your review.

Great books! They all sound very good. Have fun reading.

oh wow! what a bunch of great books! i want to read or have read all of these! hope you enjoy! happy reading!

Fantastic haul! I just finished Take Me There and it was really good. Enjoy all your books!

Great haul this week! I love the covers of some of these UK copies, especially Shiver. Enjoy your books

I read The Disreputable History and really liked it.
Is that the UK cover for Shiver? I think I like it better then the US one.
Good haul this week!