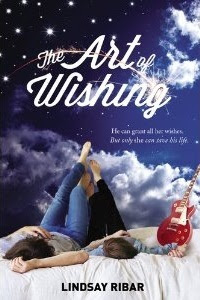 The Art of Wishing by Lindsay Ribar

From Goodreads: He can grant her wishes, but only she can save his life.

Margo McKenna has a plan of attack for everything, from landing the lead in her high school musical to dealing with her increasingly absent parents. But when she finds herself in possession of a genie's ring and the opportunity to make three wishes, she doesn't know what to do. Especially since Oliver--not blue-skinned, not bottle-dwelling, but a genie nonetheless--can see more than what she's willing to show him. With one peek into her mind, he can see the wishes that even Margo herself doesn't know she wants.

But Oliver comes with more than just mind-reading abilities, a flair for magic, and the prettiest eyes Margo's ever seen. Someone from his past is hunting him--someone bent on killing him, along with all the other genies in the world, for the sake of honor. And as Margo soon discovers, it will take more than three wishes to save him.

I really liking the sound of this. Plus the cover is cute!

Email ThisBlogThis!Share to TwitterShare to FacebookShare to Pinterest
Labels: I want to read that..., Lindsay Ribar, The Art of Wishing

I want to read that!!

I was gonna say the same as the person above but they've already said it... hmmph! Nice blog my the way :) If you have time could you pop round to my YA book blog and maybe leave a review or something so I know you came? Thanks anyhow.
Ruby - http://feedmebooksnow.blogspot.co.uk