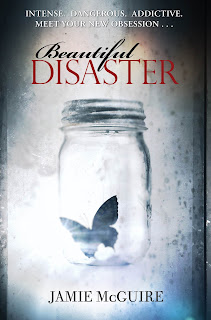 From Goodreads: The new Abby Abernathy is a good girl. She doesn’t drink or swear, and she has the appropriate percentage of cardigans in her wardrobe. Abby believes she has enough distance between her and the darkness of her past, but when she arrives at college with her best friend, her path to a new beginning is quickly challenged by Eastern University's Walking One-Night Stand.

Travis Maddox, lean, cut, and covered in tattoos, is exactly what Abby needs—and wants—to avoid. He spends his nights winning money in a floating fight ring, and his days as the ultimate college campus charmer. Intrigued by Abby’s resistance to his appeal, Travis tricks her into his daily life with a simple bet. If he loses, he must remain abstinent for a month. If Abby loses, she must live in Travis’s apartment for the same amount of time. Either way, Travis has no idea that he has met his match.

I had seen so many reviews for this – both really good and really bad - but as soon as I tried the first couple of chapters I knew I would love it!

Travis is definitely a flawed character. He’s angry, he punches first thinks later, he doesn’t *do* relationships but there is just something about him. A vulnerability perhaps that we get to see through Abby’s narration that meant I couldn’t help but love him. Having read many reviews before even picking this up, I know many readers had issues with his behaviour – some seeing it as a red flag for an abusive relationship – but I didn’t see what they saw. Yes, he does things that I found uncomfortable at times but I never felt he would hurt Abby. If anything, he seemed more likely to hurt himself,   Okay, so if someone acted like Travis in real life? Yes,  I would probably run in the other direction – I mean he does have some anger issues (I’m not sure in real life he could get away with punching as many people with no consequences!) But in book form? Well, then I say hell yes!  Mostly because it’s incredibly interesting getting to see a different side to a character like that.  I think Shep and the rest of his family ground his character somewhat – they obviously adore him and I think that made it easier to believe he was someone worth caring about.

Abby too is flawed. She seemed unable to admit to herself what she wanted. At times it felt as if she was manipulating Travis to manipulate her – the whole staying with him for a month bet (she obviously wanted to be there as much as he wanted her there!) and the whole Thanksgiving thing – she knew what he was doing but I got the impression she wanted the same as him. She just seemed to constantly need an excuse in order to do what she wanted to really do! Of course, once you learn about her past this puts it into a context and it’s easier to understand her motivations. She still made me crazy though - they both did - and I could have banged their heads together to knock some sense into the two of them. I mean, Travis might as well have been walking around with ‘I really like you’ tattooed on his forehead it was so obvious! And as for him being a ‘bad boy’ you get the sense he’s probably a saint in comparison to some of the people Abby grew up around.

I think the title of the book perfectly sums this one up. The relationship probably shouldn’t work, but it does. I loved the two of them – flaws and all – and can’t wait for Walking Disaster. Travis’s POV? Yes please! In the meantime, I will be continuing my new, strange habit, of googling guys with arm tattoos….

Reminds me of a movie- and I like these types of story lines too. I'm curious to know how much is Travis a danger to himself.