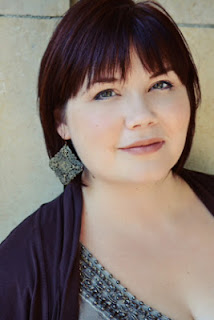 As part of the blog tour for the UK release of Crewel, Gennifer Albin has stopped by to participate in Cover Wars for her US and UK covers. Before I hand you over to Gennifer here is the synopsis for Crewel:

That’s what the other girls whisper behind her back. But sixteen year-old Adelice Lewys has a secret: she wants to fail.

Gifted with the ability to weave time with matter, she’s exactly what the Guild is looking for, and in the world of Arras, being chosen as a Spinster is everything a girl could want. It means privilege, eternal beauty, and being something other than a secretary. It also means the power to embroider the very fabric of life. But if controlling what people eat, where they live and how many children they have is the price of having it all, Adelice isn’t interested.

Not that her feelings matter, because she slipped and wove a moment at testing, and they’re coming for her—tonight.

Now she has one hour to eat her mom’s overcooked pot roast. One hour to listen to her sister’s academy gossip and laugh at her Dad’s stupid jokes. One hour to pretend everything’s okay. And one hour to escape.

Because once you become a Spinster, there’s no turning back. 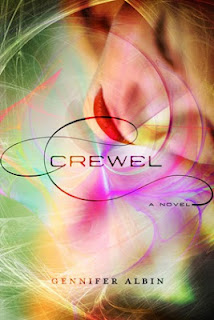 My first thought when I saw it was “oh, pretty!” It wasn’t like anything I’d imagined for the book, and I had my reservations about it. Was it too girly? What would the subsequent covers look like? I can’t claim to have much part in its creation; however, I did suggest a font change, which is how we got a cool futuristic font with such a lovely flourish. 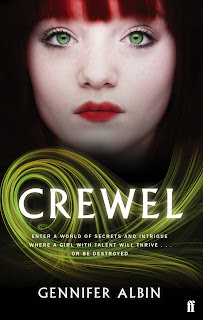 My first thought was “wow, that’s different than the U.S. Cover!” I immediately liked it, and I liked that they had a plan for subsequent covers. My only suggestion was that the girl had a bit more make-up on.

Both the covers depict the story well while having a totally different vibe. I love that both feature striking red lips, because that’s such a Spinster symbol in my mind.

So far I’m batting 2 for 2 on covers, in my opinion. It will definitely be interesting to see what other foreign territories come up with. I really can’t choose between the two because they both represent the book, and I love how different they each feel.
---

Thanks Gennifer! I really like both covers too - and I think they are definitely very different. I love the colours on the US one and the way you don't see the person straight away (or at least I didn't!) In contrast I like how bold the UK one is - I like the font used for the title, and the swirly lines!

What do you think? Do you have a strong preference for the US or UK cover?

Crewel is available to buy now, and the blog tour continues tomorrow over at Narratively Speaking.
Posted by I Want To Read That at 07:30

Both of these covers are so different! I have this to read (and can't wait to start it- it sounds amazing!) but I actually prefer the US cover to the UK one- I think the prettiness and the swirl of colour jumps out to me more than the face.