This Is So Not Happening by Kieran Scott 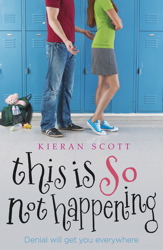 From Goodreads: After their long summer apart, Ally and Jake were hoping for a drama free senior year. Instead they are faced with a turn of events that threaten to tear them apart...for good.

It turns out that Chloe is pregnant and says that Jake is the father. Hammond is pissed at his best friend, but mostly can't believe that Ally would stay with Jake. But Ally is tired of being apart from Jake and is willing to make it work. But that is easier said than done when Jake starts blowing Ally off to go to doctor's appointments with Chloe and Ally joins the school play and meets a new cute guy.

As graduation approaches, new secrets come out and Ally realises maybe Jake isn't the guy she thought he was. After everything they've been through can Ally and Jake get out of Orchard Hill with their relationship in tact?

I got really addicted to Ally and Jake’s story when I read She’s So Dead to Us and He’s So Not Worth It last year.  Considering how the last book ended – I couldn’t wait to see how things turned out for two of my favourite characters.

The story picks up pretty much where we left it at the end of He’s So Not Worth It. The revelation of Chloe’s pregnancy obviously has a big impact on both Jake and Ally and I was pleased to see they were trying to stay together.

I was pleased that Jake ‘manned’ up and took on the responsibilty of being the father. Granted, there were a few hints placed in the second book that made me wonder if he was actually the father but he really would have gone down in my estimations if he'd handled the situation differently. He really did try to be there for Chloe despite the negative implications that would have for his relationship with Ally. And I was pleased to see Ally support Jake. It would have been really easy for her just to walk away – but she doesn’t and I have to give her kudos for that.

Of course not everything is what it seems and I kind of felt that Jake was given a really hard time once the truth came out. I thought his reaction was understandable, but at the same time could see why Ally would feel the way she does too. I was glad that it wasn’t instantly happy ever after – but of course I loved how it all ended!

One thing that did make me a bit uncomfortable was that I was never completely convinced that Chloe’s choice was actually her decision – I sometimes felt it was what she was told to do by her parents – and I wanted to know that it was her decision. Other than that – this was the perfect ending to a highly enjoyable series! I love Kieran Scott’s books.

Email ThisBlogThis!Share to TwitterShare to FacebookShare to Pinterest
Labels: 4 Stars, For Review, Kieran Scott, Reviews, This Is So Not Happening

Brilliant review! Your review has actually single handedly (is that a a word? hehe :) ) put the first book in this series at the top of my wishlist! :D Glad you enjoyed this :)

I only read the first book, and while it's not to my taste, I too, was addicted to Jake and Ally's story. Can't wait to see how it ends!