Decked With Holly by Marni Bates 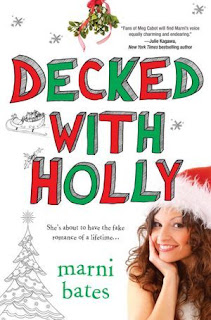 From Goodreads: Holly Dayton is about to go way out of her comfort zone. . .

Spending Christmas vacation on a cruise with her two cousins from hell isn't Holly's idea of a good time. And when in a moment of seasick-fueled desperation she lurches into an open suite--she's greeted with an eyeful of pepper spray. The culprit? A gorgeous guy calling himself Nick. But when Holly goes to make her exit, she gets the shock of her life: a corridor crammed with screaming teenage fans. Because Nick just happens to be Dominic Wyatt, drummer for ReadySet--one of the hottest bands in America.

Suddenly rumors are swirling, and Holly's face is captured on countless phones and plastered all over the Internet. But the band can't risk a scandal destroying their family-friendly image, so Dominic convinces Holly to be his fake girlfriend--just for two weeks. How bad could it be to be fauxmantically involved with one of the cutest rockstars on the planet? Holly's about to find out. . .

I couldn’t wait to read this one! I loved Awkward so as soon as I realised this was set in the same world and featured Dominic (from ReadySet) I wanted to read it so bad! And it’s just as awesome as Awkward!

This time we get a dual narrative – with both Holly and Dominic (aka Nick) telling the story. As usual I loved this format and Marni Bates nails both voices – they are totally distinct and I instantly knew who was narrating. And both characters are seriously funny (sometimes without meaning to be!)

So, yes! I love Marni Bates! It’s official – she reminds me of Meg Cabot – feel good stories, laugh out loud moments – just really, really good fun. And the romance is great too.

Was the setting realistic? I don’t think that’s the point – it’s sweet, fun and how many people day dream of meeting a celebrity and have them fall in love with them? Plus I thought the motivations given for both Holly and Nick to enter into their ‘fauxmance’ were solid. Especially Holly, because honestly, her cousins and Aunt were HORRIBLE so I could see how having a ‘Rock Star Boyfirend’ might make her feel a little better about herself. One thing that did annoy me though, was that both her Grandpa and Nick, let her Aunt and Cousins be as mean as they were. Did they not see how much it hurt Holly’s feelings? I could forgive Nick since he might not have felt it his place, but I just didn’t see why her grandpa would sit there and let her Aunt say all those things.

I loved her friend Jen! Loved Mackenze and Corey’s cameo and the rest of ReadySet were just a brilliant as I remembered from Awkward. I seriously can’t wait for Marni Bates’ next book Invisible when it’s published next year This time it’s Jane’s story and it sounds fabulous.

Ooh, I loved Awkward and I really want to read this. Thanks for the review!

This is the second review of books by this author of yours I've read, I love the covers and the sound of both of them will definitely be looking into her books, Thanks!

Totally in love with awkward!. Believe me, you have to read this