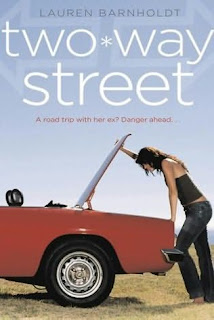 From Amazon:
There are two sides to every breakup.
This is Jordan and Courtney, totally in love. Sure, they were an unlikely high school couple. But they clicked; it worked. They're even going to the same college, and driving cross-country together for orientation.
Then Jordan dumps Courtney -- for a girl he met on the Internet.
It's too late to change plans, so the road trip is on. Courtney's heartbroken, but figures she can tough it out for a few days. La la la -- this is Courtney pretending not to care.
But in a strange twist, Jordan cares. A lot.
Turns out, he's got a secret or two that he's not telling Courtney. And it has everything to do with why they broke up, why they can't get back together, and how, in spite of it all, this couple is destined for each other.
I like that although this is written in first person we get to hear the story from both characters point of view. Barnholdt did a great job of giving Courtney and Jordan unique voices and both characters were fleshed out enough to give them extra depth. I found the dual narrative a fantastic way to tell the story as it meant we not only got to see both sides of the events and got to know things the other character didn’t, we also got to see how Courtney and Jordan perceived each other. I've never experienced that before and feel it really added something to the story. I also loved both Courtney and Jordan as characters and believed instantly in their relationship. The flashbacks helped flesh out the story and there were believable motivations behind the characters actions – nothing in the plot felt at all contrived.
This was a really sweet book and I really wish there was a sequel as I’d love to spend more time with the characters and see how they navigate college life.
Posted by I Want To Read That at 08:38