The idea for this post comes from Kristi @ http://thestorysiren.com/

I bought the following books this week. I'm really looking forward to reading them all!

Story of a Girl by Sara Zarr
From Amazon: I was thirteen when my dad caught me with Tommy Webber in the back of Tommy's old Buick, parked next to the old Chart House down in Montara at eleven o'clock on a Tuesday night. Tommy was seventeen and the supposed friend of my brother, Darren.I didn't love him.I'm not sure I even liked him.In a moment Deanna Lambert's teenage life is changed forever. Struggling to overcome its lasting repercussions and the stifling role of "school slut," she longs to escape a life defined by her past. With subtle grace, complicated wisdom and striking emotion, The Story of a Girl reminds us of our human capacity for resilience, epiphany and redemption.
Kissed by an Angel by Elizabeth Chandler 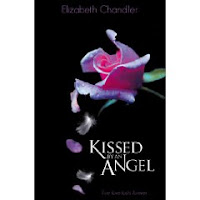 From Amazon: Ivy and Tristan are meant to be together. Both stunningly attractive, brilliantly talented and very much in love, they think their happiness will last forever. When a terrible car accident shatters their world, killing Tristan and injuring Ivy, she must face life alone - or so she thinks. However, Tristan is watching over her as her guardian angel - so close she can feel his touch and hear his voice. And no one needs a guardian angel more than Ivy, because someone is trying to kill her. But if Tristan saves Ivy, his mission on earth will be finished, and he'll have to leave her behind. Will saving Ivy mean losing her forever?

Back Cover: Hildy Biddle is waiting for the chance to prove herself as more than a small-town high school journalist. The trouble is, hwr town's biggest story stars a ghost, But while the local paper is playing up townspeople's fears with shocking headlines of creepy happenings, Hildy is determined to discover what's really going on. Unfortunately, her desire to uncover the truth is making some people nervous. With rumors swirling and tensions high, can Hildy push past all the buzz and find out the real truth?

From Amazon: WARNING SPOILERS for EVERMORE
Just as Ever is learning everything she can about her new abilities as an immortal, initiated into the dark, seductive world by her beloved Damen, something terrible is happening to him. As Ever’s powers are increasing, Damen’s are fading—stricken by a mysterious illness that threatens his memory, his identity, his life. Desperate to save him, Ever travels to the mystical dimension of Summerland, uncovering not only the secrets of Damen’s past—the brutal, tortured history he hoped to keep hidden—but also an ancient text revealing the workings of time. With the approaching blue moon heralding her only window for travel, Ever is forced to decide between turning back the clock and saving her family from the accident that claimed them—or staying in the present and saving Damen, who grows weaker each day...

Two way street by Lauren Barnholdt
From Amazon: This is Jordan and Courtney, totally in love. Sure, they were an unlikely high school couple. But they clicked; it worked. They're even going to the same college, and driving cross-country together for orientation. Then Jordan dumps Courtney -- for a girl he met on the Internet. It's too late to change plans, so the road trip is on. Courtney's heartbroken, but figures she can tough it out for a few days. La la la -- this is Courtney pretending not to care. But in a strange twist, Jordan cares. A lot.
Turns out, he's got a secret or two that he's not telling Courtney. And it has everything to do with why they broke up, why they can't get back together, and how, in spite of it all, this couple is destined for each other.

I really like the cover for Two Way Street and Kissed by An Angel!

Nice haul this week! Also, welcome to the book blogosphere. :-)

Excellent books -- I really enjoyed "Blue Moon," even more than I liked "Evermore!" And the cover for "Kissed By An Angel" is so pretty in the UK!

Great books you got this week. Hope you enjoy reading them all.

Story of a Girl, Kissed by an Angel and Two-way Street are all brilliant books. Happy reading!

You got some great books this week. Hope you enjoy them all! :)