Bite Me! by Melissa Francis 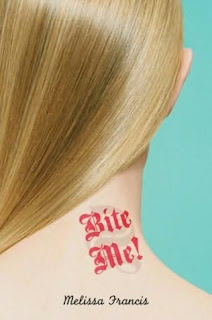 From Amazon: AJ Ashe isn't your typical seventeen-year-old vampire—as if there is such a thing! She's stuck in the middle of a huge fight between her two BFFs. Her ex-boyfriend—whom she's still totally in love with, by the way—is now her stepbrother. A former classmate—who, um, she may or may not have turned into a vampire—is stalking her. And now, apparently, the fate of humankind lies in her little undead hands. What ever happened to the good old days, when all a vampire girl had to worry about was the occasional zit and hiding her taste for blood?
I was really looking forward to reading this and it didn’t disappoint. Melissa Francis has a very easy and witty writing style that helped to bring AJ to life. She was an interesting character that I really liked. The vampire mythology felt very vague in the beginning of the book but you soon realise this is because AJ was also in the dark and we discovered information at the same time as she did – which I thought worked well. Overall, Francis created a very interesting take on the vampire myth which managed to feel fresh – ideal when there are so many different vampire stories out there.
I really liked the relationship between AJ and Ryan and was please to see a legitimate reason for them not being together. I also enjoyed the relationship AJ had with her mother – which made the whole Ryan situation more believable . The story was , perhaps, slightly predictable in places and I wasn't particularly surprised at the end but I still found it enjoyable watching the characters work it all out. Also, there were enough ends left untied for the sequel that (i believe) is due in spring 2010. I’ll certainly be grabbing it when it’s released.
Posted by I Want To Read That at 19:07

This sounds so good. Great review!