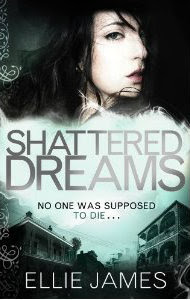 From Goodreads: Upon the death of her grandmother, Trinity arrives on her aunt's doorstep in New Orleans with virtually no knowledge of her mysterious heritage. Dropped into high school, she is trying her best to fit in, but there is something about her, connected to the mysterious city and her parents death, that makes her different.

When a game of truth or dare in a deserted New Orleans house gets out of control, Trinity starts to see things; twisted visions of the future that she tries to suppress. But all too quickly the dreams accelerate – terrifying images of a girl locked in a dark room. And when the head cheerleader goes missing, Trinity has to decide whether to step forward with what she's seen: a tough choice when the police are desperate for a suspect and she's falling in love with the missing girl's boyfriend.

Nothing prepares her for the dark odyssey that ensues, the surprising romance she finds along the way, or the shocking truths she learns. Not just about the girl who has gone missing, but the past that has been hidden from her, and the future that awaits.

I love stories surrounding psychic abilities so it's no surprise to me that I enjoyed this.  Set in New Orleans the story has a very dark, atmospheric feel.  As readers we are piecing together what is happening along side Trinity - and I have to say I had no idea what was going on most of the time.  But I kind of liked it!

Having been raised by her grandmother Trinity is forced to move to New Orleans to live with her aunt when her grandmother dies.  We first meet Trinity during a game of Truth or Dare - one which ends up with Trinity having terrible visions.  When a girl goes missing Trinity has to decide whether to step forward and reveal her ability...

I really like the way this story is kind of part crime thriller, part supernatural, part romance.  It's a good mix and I'm very intrigued to see where the author is planning on taking the series.  I really liked Trinity and her Aunt.   Chase was nice but I must admit I didn't love him.  I did like him though.  It's just a certain character named Dylan kind of stole each scene he was in! I really hope we see more of him in further instalments.

I loved the setting too.  New Orleans, setting it post Katrina.  It felt as if it had it's own mystery and added to the atmosphere of the story.

I think the choice of telling the story from Trinity's perspective might be a love or hate it thing.  Since Trinity wasn't sure what was real and what was not, sometimes it was hard as a reader to know what was going on too.  Most of the time I think this worked really well - especially during the visions - where it gives the story a dark and atmospheric feel.  Plus it gave us a great insight into how Trinity must feel - the confusion and fear - and the impact her visions had on her day to day life. But there were a few times when I was just confused because I wasn't completely sure I understood what was happening, or what had just happened.  But overall I think it added to the story - I liked feeling as if I were in Trinity's shoes experiencing the confusion with her.

I'll definitely be reading the next book.  I'm really invested in Trinity's story and I want to find out more. I have a feeling there is more to Trinity than we think.   Plus I really want a Dylan fix!

Looking forward to this one. Didn't realise it was set in New Orleans.