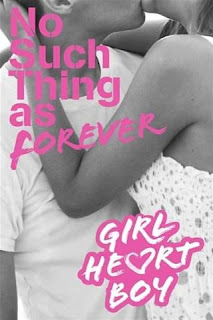 From the publisher: Meet four girls, three boys, all turning 18 and get set to follow their eventful final year at school. Cass is known as Ms. Monogamy, Ashley is a player, Donna is a party girl. But what about Sarah? Her friends tease her for being uptight, but she's waiting for The One. Now she's found him, but is he forever - or is Sarah just his summer fling?

Girl Hearts Boy by Ali Cronin is described as the 'hottest, sexiest, teen romance series coming this summer' The press release goes on to describe it as 'Skins meets The OC in the hottest new teen sensation – you won’t want to put these books down! Girl Heart Boy is guaranteed to be this summer’s hottest read.'

And that's not all! You can also engage with the characters as there are books,  ebooks with exclusive x-rated scenes and even video blogs. Yes - every Tuesday Sarah will post a vlog - so be sure to check them out and keep up with all the antics!

And this is the first vlog:

I don't know about you guys but I am LOVING Sarah!

Girl Hearts Boy: No Such Thing As Forever is available now in ebook.  The paperback will be published 2 August 2012.

The first exclusive ebook is available 5 July and is called Girl's Night In.  Following that in August is the second novel (in ebook - the paperback will be available in October 2012) and the second exclusive ebook Forget Me Not is coming September 2012.
Posted by I Want To Read That at 20:00