Stolen Away by Alyxandra Harvey 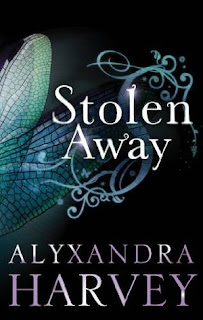 From Goodreads: For seventeen years, Eloise Hart had no idea the world of Faery even existed. Now she has been abducted and trapped in the Rath of Lord Strahan, King of Faery. Strahan was only meant to rule for seven years, as Faery tradition dictates, and then give up his crown to another. But he won't comply, and now chaos threatens both worlds.

The only one who can break his stranglehold on the Faery court is his wife. . . Eloise's aunt Antonia. Using Eloise to lure Antonia, Strahan captures his wife, desperate to end the only threat to his reign. Now Eloise must become the rescuer. Together with her best friends Jo and Devin, she must forge alliances with other Fae, including a gorgeous protector named Lucas, and Strahan's mysterious son, Eldric—who may or may not betray them.

I'm a big fan of Alyxandra Harvey's Drake Chronicles so I was really excited to read her take on Fae. And as with her previous novels, there is much to enjoy here.

There is such fun, and humour in Harvey's novels that I can't help but really like them. This one does, however, feel as if it would work better as a series. As a standalone it felt over too quickly - I just want to get back into the world and learn more about it and spend more time with the characters. I think it's a testament to Harvey's talent as a writer that I am left wanting more though.

I did really love her take on Fae. I really liked the characters - Eloise, Jo and Devin (loved him!) and enjoyed the romance element of the story. Lucas and Eldric are awesome! I thought the mythology behind it was really good too - another reason for me to want to get back into the world! Harvey also manages to rock the dual narrative again - giving us the story from both Eloise and Jo's point of view.  I love this and it works brilliantly.

Another really enjoyable novel from Harvey. While I didn't love it quite as much as the Drake Chronicles I'm sure that would change if this were to become a series.

The fact that this book is a standalone is probably enough to get my attention given current tendencies :p but it also sounds lovely with everything anyone could really want! I will def be reading this!