Did You Know? Some Book News...

I've had quite a bit of book news emailed to me lately so I thought I'd do a collective post for it all.

Starters by Lissa Price, an American screenwriter, publishing in April 2012, is an action-packed thriller set in a world where eternal youthfulness can be had – at a price. One girl has the ability to bring it all tumbling down . . . RHCB acquired UK and Commonwealth rights from Heather Shapiro at Baror International and will be launching globally alongside Random Inc for a truly international campaign.

A post- apocalyptic Los Angeles is the setting for Struck by Jenifer Bosworth, publishing in July 2012. After the city is devastated by an earthquake, Mia Price finds herself in the middle of a power struggle between two fanatical cults; one that wants to save the world and another that wants to destroy it. RHCB acquired UK and Commonwealth rights from Alex Webb of the Rights People, acting on behalf of FSG.

Sangu Mandanna’s debut The Lost Girl publishes in early 2013 and centres around Eva, a feisty teen girl who technically has no true identity of her own. Eva is forced to abandon everything she's ever known and loved, finding herself torn between two worlds. RHCB acquired UK and Commonwealth rights from Sarah Malloy of A.M. Heath acting on behalf of the Elizabeth Kaplan agency.

And finally, children’s librarian Emma Pass, releases ACID in early 2013. This action-packed novel introduces us to Jenna Strong, a truly kick-ass heroine who is serving time in an all-male prison for the murder of her parents. Set one hundred years in the future in a Big Brother style society; Britain is now under the control of ACID – a terrifying all-seeing police force. RHCB acquired world rights from Carolyn Whitaker of London Independent Books.

Ruth Knowles, Commissioning Editor comments, ‘Dystopian fiction is a much-talked about genre, particularly with the release of The Hunger Games movie next spring. We have acquired some fantastic futuristic thrillers that we know will appeal to this audience, and are confident that RHCB will have some of the most exciting novels in the genre. The worlds within them are very different from each other, but all completely hook you in from the first page and do not let go.’

The all sound AMAZING! Can't wait!

I'm a little late sharing this as I think it's already started but Guardian Teen Books and Random House have partnered on a interactive story you can access online.  Here is the info I was sent:

Guardian Teen Books has partnered with Random House for a new interactive, serialised story called Root - a fast-paced thriller set in the shadowy world of computer hacking and espionage. Every weekday for six weeks a new chapter will be released on guardian.co.uk/teen-books. The content will be directly influenced by readers’ contributions, such as their ideas for characters' personalities and skills.

The heroine Molly Root is a 15 year old computer genius whose friend Danny is killed after being caught stealing priceless data from a ruthless global corporation. Now she's in over her head. So far Molly Root's mission to get to the bottom of her best friend's murder has taken her on a perilous trail across London. Her key lead is a dodgy police detective - and her attempts to expose his shady contacts are testing her ingenuity to the limits.

As well as incorporating suggestions from readers, the story will also be brought to life via several social media platforms. For example, Guardian Teen Books' Twitter and Facebook accounts will be providing behind the scenes updates of how Molly is progressing, along with clips on Audioboo featuring the voicemails that Molly has discovered. This will be accompanied by onsite quizzes and photo puzzles on Flickr. 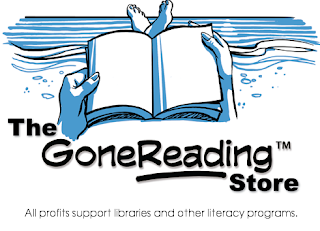 I also had an email from the new philanthropic organization called Gone Reading International.  They market a line of gifts for readers and donate 100% of company profits to fund new libraries in the developing world. You can read more about them at http://www.gonereading.com/.  They have some really cute products - personally I'm kind of in love with the Evolution of Reading Tote Bag!  It's awesome, right? 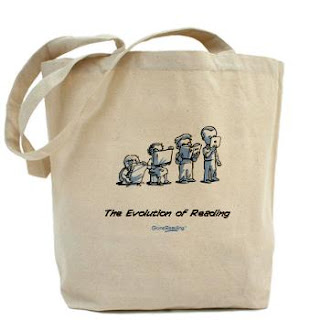 I've also come across a few book bargains if you are like ebooks. 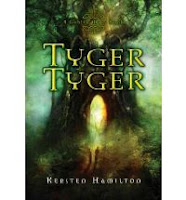 * Kiss for Lula by Samantha Mackintosh is currently free on Kindle (on both Amazon.co.uk and Amazon.com)  I really need to read this one promto - it sounds awesome!

* The Shadowing: Hunted by Adam Slater is also currently free on Kindle ( on both Amazon.co.uk and Amazon.com).  Despite the cover giving me the creeps (!) it does sound rather good!

I love that bag! Do they deliver to the UK? I'm off to find out...
Thanks a lot for all the news!

Thanks so much for posting about the RHCB press release - I'm in such great company and am dying to read the other three books!