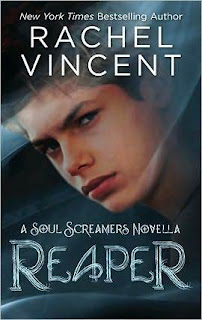 From Goodreads:  Tod Hudson was a typical teenager. He liked girls, sports, food and tolerated his younger brother, Nash. In fact, he had his whole life in front of him--and due to his bean sidhe heritage, it was going to be a very long life indeed. And then the car accident occurred.

Suddenly Tod's future wasn't so sure, and he had to make a choice. Life... Death... or something Between....

If you are a fan of the Soul Screamers series you really need to read this!  I really enjoyed it and I loved having the story told from Tod's point of view.  If I hadn't been in love with him before reading this I definitely would have been afterwards.

The story is a prequel in the sense it takes place before Tod becomes a reaper.  We get to see what he was like, plus we get to see Nash as a 15 year old and we learn of Sabine.  I've heard it's best to read this after at least the third book in the series and I would have to agree.  I read it between books 3 and 4 and it seemed to fit perfectly.

There's quite a surprising revelation in this story that I really didn't see coming but in retrospect makes so much sense.  I won't go into details here -  it makes you see Tod in a different light but I do wonder if it's been kept a secret all this time.

I love this series - I love this world.  And damn I love Tod!  How did he sneak up on me?  Because I was a major Nash fan at the beginning of this series but somehow Tod has completely won my affections!

A great addition to the series - I look forward to more of these novellas.

I love Tod- I liked him before I read Reaper, but I absolutely LOVE him after reading it. He's a great character and I enjoyed reading from his perspective. I'm glad you liked it too! :)

I really love the sound of this one. The series is one I'm really enjoying so far, but I still need to read the third (and fourth!) books in the series!