And By The Way by Denise Deegan 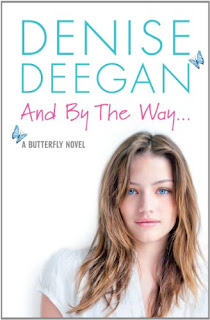 From Goodreads: At Strandbrook College, we are Kids Of. Kids of diplomats, media stars, musicians, artists, actors, oh, and wealthy people who aspire to all of that. I'm the kid of a rock star. Means nothing to me. When Mum died, six months ago, I didn't just lose her, I lost my dad -- to work. The only thing he does now is annoy me. He hires people like 'The Stylist' who wears bullets in her belt and makes him look like a hobo. Seriously. But 'The Rockstar' isn't the only person who drives me mad. There's David McFadden, a guy in my class who could have helped but didn't. Now, it's too late. I don't want his help. Because I'm not going to trust anyone, love anyone, rely on anyone. That way I'll never be hurt again. If only I could solve the problem of Rachel, my best friend, who won't let me pull back just like that. Even David McFadden won't stay out of my face. But I'm not going to fall for his blue eyes, his windswept hair or the plaited leather on his wrist. And when he says he wants to help, I'm sure as hell not going to listen...

There is something about this book that really draws you in.  I became really invested in the story and the characters.

We meet Alex six months after her mother has died.  She's adamant that she doesn't want anyone - believes if she 'doesn't do close' she wont get hurt.  But David McFadden refuses to let her push him away - and she starts to believe that maybe she can let people in again...

Alex is a very complicated character.  She is intensely private, refuses to let anyone close - and you can truly see just how completely lost she is.  Her father has buried himself into his work to cope with losing Alex's mum - and is never there.  You can really feel Alex's resentment toward her father - and I completely understood why she pushes him away.  She's kind of fierce and I really loved her for it.

David is a breath of fresh air.  He's just lovely - I wanted to squish him!  I love that he wouldn't let Alex push him away, that he understands what she's going through as he's been there himself, but also in how he actually talks to Alex - listens to her, knows her.  The connection between them feels genuine.

I loved the relationship between Alex and her dad - how it evolves.  How he comes to understand that he really needs to be there for her.  She does lose herself there for a while - but she has a lot to deal with.  I also loved her friendship with Rachel and Sarah.  Even when Sarah is a bit annoying at times it is obvious that these three are really good friends and are completely there for each other.

There is a lot happening in the story - more than I expected -  and that is what make this great.  I went into it expecting one thing and got so much more!  I'm really looking forward to  And For Your Information - I can't wait to see what is next in store for them all.

Email ThisBlogThis!Share to TwitterShare to FacebookShare to Pinterest
Labels: 4 Stars, And By The Way, Denise Deegan, For Review, Reviews

I really, really want to read this one! It sounds wonderful.

I really, really want to read this one too! Thank you for the great review.

I so, so, so, so want to read this! It's now the book On My Wishlist for the week! Thanks for the amazing review, Sammee! :)