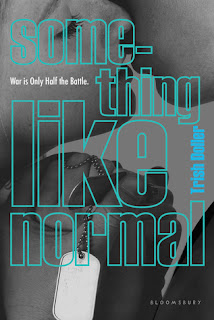 From Goodreads: A powerful debut novel about a young Marine's return home from Afghanistan and the new life and love he finds while fending off the ghosts of war.

When Travis Stephenson returns home from Afghanistan, his parents are on the brink of divorce, his brother has stolen his girlfriend and his car, and nightmares of his best friend getting killed keep him completely spooked. But when he runs into Harper Gray, a girl who despises him for trashing her reputation with a middle school lie, life actually starts looking up. As Travis and Harper see more of each other, he starts falling for her and the way through the family meltdown, the post-traumatic stress, and the possibility of an interesting future begins to emerge.

His sense of humor, sense of his own strength, and incredible sense of honor make Travis an irresistible and eminently lovable hero in this fantastic and timely debut novel.

Email ThisBlogThis!Share to TwitterShare to FacebookShare to Pinterest
Labels: I wan to read that, Something Like Normal, Trish Dollar