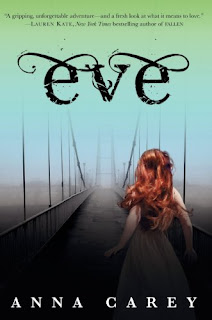 From Goodreads: Where do you go when nowhere is safe?

Sixteen years after a deadly virus wiped out most of Earth’s population, the world is a perilous place. Eighteen-year-old Eve has never been beyond the heavily guarded perimeter of her school, where she and two hundred other orphaned girls have been promised a future as the teachers and artists of the New America. But the night before graduation, Eve learns the shocking truth about her school’s real purpose—and the horrifying fate that awaits her.

Fleeing the only home she’s ever known, Eve sets off on a long, treacherous journey, searching for a place she can survive. Along the way she encounters Arden, her former rival from school, and Caleb, a rough, rebellious boy living in the wild. Separated from men her whole life, Eve has been taught to fear them, but Caleb slowly wins her trust... and her heart. He promises to protect her, but when soldiers begin hunting them, Eve must choose between true love and her life.

I'd been looking forward to reading this one for a while so I was really pleased to be offered a review copy. And I am pleased to say it lived up to my expectations.  I really am starting to love dystopian fiction!

I really liked the characters in this one.  Eve is great as the story's narrator.  I found myself automatically liking her - and growing to like her more and more as the story progressed.  She's not always perfect - in fact one mistake she makes has rather devastating consequences - but that just makes her more real.  I adored Arden - she's prickly but underneath all that she obviously cares a great deal.  And Caleb is just lovely.  He's really kind and nice - and it doesn't surprise me that he manages to win Eve's trust.  It's not just Eve, Caleb and Arden that have a strong impact though - many of the other characters we meet throughout the story do too - or at least they did for me.

I also liked the concept behind the novel - a virus that's killed off most of the population, the way the girls are segregated and raised to fear men,  and the true fate that awaits them.  It all feels rather chilling actually - both the purpose of the school and the reality that awaits them outside of it's gates.  One small niggle though is that I don't fully understand the logic behind educating the girls to such a high standard if their fate is already sealed?  But perhaps there are reasons we don't know yet.

I'm very interested to see how this progresses and am really looking forward to Once when it's published.  I have a few ideas about the real reason they seem to be so interested in Eve - I'm not convinced it's for the reason they think it is - I don't think they would be that intent on finding her if it was.  But I guess I'm just going to have to wait to find out!  Roll on 2012!

Glad to hear your love of dystopian is growing. I must get to this book.