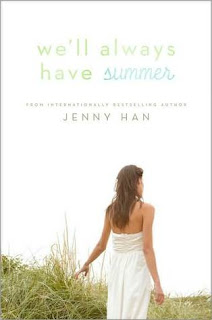 From Goodreads: It's been two years since Conrad told Belly to go with Jeremiah. She and Jeremiah have been inseparable ever since, even attending the same college-- only, their relationship hasn't exactly been the happily ever after Belly had hoped it would be. And when Jeremiah makes the worst mistake a boy can make, Belly is forced to question what she thought was true love. Does she really have a future with Jeremiah? Has she ever gotten over Conrad? It's time for Belly to decide, once and for all, who has her heart forever.

I was so excited to see this on galley grab. I loved both of the previous books in the series and I did not want to wait until next year when this one publishes in the UK to find out what happens. I had to know - who would she choose? And would it be the one I wanted it to be?

The story starts two years after the events of It's Not Summer Without You. Belly is at college - with Jeremiah - and they have been together for the past two years. But Belly learns a shocking truth - something she thought would never happen. Narrated from Belly and Conrad's point of view we get the final instalment in this wonderful series.

So I loved it! I loved every thing about it - it was one of those books where I couldn't wait to get to the end to find out what would happen, but at the same time didn't want it to end. Belly was even more adorable - if that's possible!  I love how she has grown over the course of the series.  Jeremiah is still lovely - but seeing him at university with his friends showed a side to him we didn't see during the summers at Cousins and I'm not sure it was a side I particularly liked.  Conrad was his usual self and having portions of the story narrated from his point of view gave more insight into his character and I think I fell  in love with him just that little bit more!

I can honestly say I am not ready for this to be the last in the series - I don't want to leave these characters just yet. So I will be holding out hope that the author may revisit them at a later date. I know I would be the first in line if that were to happen!

Did Belly end up with the one I hoped she would? I am so not telling! To be honest I think it would be too much of a spoiler if I said whether I was happy with her decision - I think in previous reviews for the series I have made it very clear who I'd like her to end up with - but I will say that despite my own preferences I do think the ending was the right one for the story.

I can't wait to see what Jenny Han writes next. A great end to a fabulous series - if you haven't read them yet then I recommend you check them out.

This series sounds so incredible! And the covers are GORGEOUS.